Clinical Interaction between Brain and Kidney in Small Vessel Disease 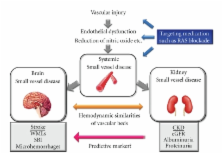 Patients with chronic kidney disease (CKD) are well known to have a higher prevalence of cardiovascular disease from epidemiological studies. Recently, CKD has also been shown to be related to neurological disorders, not only ischemic brain injury but also cognitive impairment. This cerebrorenal connection is considered to involve small vessel disease in both the kidney and brain, based on their hemodynamic similarities. Clinical studies suggest that markers for CKD such as estimated glomerular filtration rate (eGFR), proteinuria, and albuminuria may be helpful to predict brain small vessel disease, white matter lesions (WMLs), silent brain ischemia (SBI), and microhemorrhages. Recently, changes in the vascular system of the brain have been shown to contribute to the onset and progression of cognitive impairment, not only vascular dementia but also Alzheimer's disease. Patients with CKD are also reported to have higher risk of impaired cognitive function in the future compared with non-CKD subjects. These results indicate that CKD markers may be helpful to predict the future risk of neuronal disease.

Neurovascular regulation in the normal brain and in Alzheimer's disease.

Relationship between aortic stiffening and microvascular disease in brain and kidney: cause and logic of therapy.

Natasha F. O’Rourke,  Banaz Safar (2005)
A close relationship has been established between microvascular damage in brain and kidney and indices of age and hypertension (pulse pressure, aortic pulse wave velocity, and augmentation index). The mechanism of such association has not been established, nor has rationale for prevention and treatment of microvascular damage. A logical pathophysiological explanation can be offered on the basis of differential input impedance in the brain and kidney compared with other systemic vascular beds. Torrential flow and low resistance to flow in these organs exposes small arterial vessels to the high-pressure fluctuations that exist in the carotid, vertebral, and renal arteries. Such fluctuations, measurable as central pulse pressure, increase 3- to 4-fold with age. Exposure of small vessels to highly pulsatile pressure and flow explains microvascular damage and resulting renal insufficiency and intellectual deterioration, according to the mechanism established by Byrom >50 years ago. The logical approach to prevention and treatment requires reduction of central pulse pressure. Because the aorta and large arteries are not directly affected by drugs, this entails reduction of wave reflection by dilation of conduit arteries elsewhere in the body. This can be accomplished by regular exercise and by drugs such as nitrates, calcium channel blockers, angiotensin-converting enzyme inhibitors, and angiotensin receptor blockers. The explanation given here accounts for greater and earlier vascular damage in diabetes mellitus (relative microvascular fragility) and is similar to that given for vascular changes of pulmonary hypertension caused by ventricular septal defects and other congenital vascular shunts.