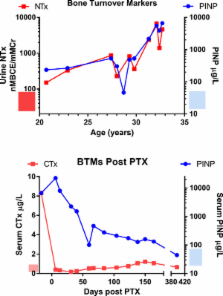 We present the case of a 34-year-old Caucasian woman with X-linked hypophosphataemia. She developed tertiary hyperparathyroidism with markedly high bone turnover requiring total parathyroidectomy and had prolonged requirement for intravenous calcium infusion after surgery. She had a novel mutation in her phosphate-regulating gene with homologies to endopeptidases on the X-chromosome and had an unusual degree of dependence on phosphate supplementation. Prior to operative intervention she had a trial of cinacalcet that improved bone turnover markers when used in isolation but which led to a paradoxical rise in parathyroid hormone levels when given with phosphate supplementation. After correction of hungry bone syndrome, the renal phosphorus threshold normalised as a manifestation of hypoparathyroid state despite marked elevation in level of fibroblast growth factor 23.

This case illustrates the risk of tertiary hyperparathyroidism as a complication of treatment for hypophosphataemia; it highlights the morbidity associated with hungry bone syndrome and provides novel insight into renal handling of phosphorus.

Approach to the hypophosphatemic patient.

Michael J. Econs,  Erik A Imel (2012)
Hypophosphatemia is commonly missed due to nonspecific signs and symptoms, but it causes considerable morbidity and in some cases contributes to mortality. Three primary mechanisms of hypophosphatemia exist: increased renal excretion, decreased intestinal absorption, and shifts from the extracellular to intracellular compartments. Renal hypophosphatemia can be further divided into fibroblast growth factor 23-mediated or non-fibroblast growth factor 23-mediated causes. Proper diagnosis requires a thorough medication history, family history, physical examination, and assessment of renal tubular phosphate handling to identify the cause. During the past decade, our understanding of phosphate metabolism has grown greatly through the study of rare disorders of phosphate homeostasis. Treatment of hypophosphatemia depends on the underlying disorder and requires close biochemical monitoring. This article illustrates an approach to the hypophosphatemic patient and discusses normal phosphate metabolism.

Chris Cowell,  C Verge,  Adrienne Howard … (1991)
Patients with X-linked hypophosphatemic rickets, which is clinically manifested by growth failure and bowing of the legs, are usually treated with phosphate and a vitamin D preparation. However, the efficacy of this treatment has been disputed, and nephrocalcinosis is a recognized complication of therapy. We studied 24 patients with X-linked hypophosphatemic rickets (9 boys and 15 girls) ranging in age from 1 to 16 years (median, 5.3). The duration of combination therapy ranged from 0.3 to 11.8 years (median, 3.0). We measured height as a standard-deviation (SD) score (the number of SDs from the mean height for chronologic age). Measurements made before the age of two years or after the onset of puberty were excluded. We compared the results with those reported in 1971 for 16 untreated prepubertal Australian patients. We also determined the severity of nephrocalcinosis (on a scale of 0 to 4, with 0 indicating no abnormalities and 4 stone formation) with renal ultrasonography and whether it could be related to the dosage of phosphate or vitamin D or to other factors. Patients treated for at least two years before the onset of puberty (n = 19) had a mean height SD score of -1.08, as compared with -2.05 in the untreated historical controls. The 13 patients who had been treated with calcitriol and phosphate for at least two years had an increase in the mean height SD score of 0.33, from -1.58 to -1.25 (95 percent confidence interval, 0 to 0.67; P = 0.05). Nineteen of the 24 patients (79 percent) had nephrocalcinosis detected on renal ultrasonography. The grade of nephrocalcinosis was significantly correlated with the mean phosphate dose (r = 0.60, P = 0.002), but not with the dose of vitamin D or the duration of therapy. All patients had normal serum creatinine concentrations. Therapy with calcitriol and phosphate may increase the growth of children with X-linked hypophosphatemic rickets. Nephrocalcinosis in these children represents a complication of therapy and is associated with the dose of phosphate received.

Calcimimetics as an adjuvant treatment for familial hypophosphatemic rickets.