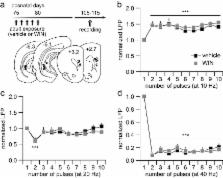 Converging epidemiological studies indicate that cannabis abuse during adolescence increases the risk of developing psychosis and prefrontal cortex (PFC)-dependent cognitive impairments later in life. However, the mechanisms underlying the adolescent susceptibility to chronic cannabis exposure are poorly understood. Given that the psychoactive constituent of cannabis binds to the CB1 cannabinoid receptor, the present study was designed to determine the impact of a CB1 receptor agonist (WIN) during specific windows of adolescence on the functional maturation of the rat PFC. By means of local field potential (LFP) recordings and ventral hippocampal stimulation in vivo, we found that a history of WIN exposure during early (postnatal day -P- 35-40) or mid-(P40-45) adolescence, but not in late adolescence (P50-55) or adulthood (P75-80), is sufficient to yield a state of frequency-dependent prefrontal disinhibition in adulthood comparable to that seen in the juvenile PFC. Remarkably, this prefrontal disinhibition could be normalized following a single acute local infusion of the GABA-Aα1 positive allosteric modulator Indiplon, suggesting that adolescent exposure to WIN causes a functional downregulation of GABAergic transmission in the PFC. Accordingly, in vitro recordings from adult rats exposed to WIN during adolescence demonstrate that local prefrontal GABAergic transmission onto layer V pyramidal neurons is markedly reduced to the level seen in the P30-35 PFC. Together, these results indicate that early and mid-adolescence constitute a critical period during which repeated CB1 receptor stimulation is sufficient to elicit an enduring state of PFC network disinhibition resulting from a developmental impairment of local prefrontal GABAergic transmission.

Why do many psychiatric disorders emerge during adolescence?

Tomáš Paus,  Matcheri Keshavan,  Jay Giedd (2008)
The peak age of onset for many psychiatric disorders is adolescence, a time of remarkable physical and behavioural changes. The processes in the brain that underlie these behavioural changes have been the subject of recent investigations. What do we know about the maturation of the human brain during adolescence? Do structural changes in the cerebral cortex reflect synaptic pruning? Are increases in white-matter volume driven by myelination? Is the adolescent brain more or less sensitive to reward? Finding answers to these questions might enable us to further our understanding of mental health during adolescence.

Peter Uhlhaas,  Wolf Singer (2006)
Following the discovery of context-dependent synchronization of oscillatory neuronal responses in the visual system, novel methods of time series analysis have been developed for the examination of task- and performance-related oscillatory activity and its synchronization. Studies employing these advanced techniques revealed that synchronization of oscillatory responses in the beta- and gamma-band is involved in a variety of cognitive functions, such as perceptual grouping, attention-dependent stimulus selection, routing of signals across distributed cortical networks, sensory-motor integration, working memory, and perceptual awareness. Here, we review evidence that certain brain disorders, such as schizophrenia, epilepsy, autism, Alzheimer's disease, and Parkinson's are associated with abnormal neural synchronization. The data suggest close correlations between abnormalities in neuronal synchronization and cognitive dysfunctions, emphasizing the importance of temporal coordination. Thus, focused search for abnormalities in temporal patterning may be of considerable clinical relevance.

Cannabis use and risk of psychotic or affective mental health outcomes: a systematic review.

Theresa Moore,  Stanley Zammit,  Anne Lingford-Hughes … (2007)
Whether cannabis can cause psychotic or affective symptoms that persist beyond transient intoxication is unclear. We systematically reviewed the evidence pertaining to cannabis use and occurrence of psychotic or affective mental health outcomes. We searched Medline, Embase, CINAHL, PsycINFO, ISI Web of Knowledge, ISI Proceedings, ZETOC, BIOSIS, LILACS, and MEDCARIB from their inception to September, 2006, searched reference lists of studies selected for inclusion, and contacted experts. Studies were included if longitudinal and population based. 35 studies from 4804 references were included. Data extraction and quality assessment were done independently and in duplicate. There was an increased risk of any psychotic outcome in individuals who had ever used cannabis (pooled adjusted odds ratio=1.41, 95% CI 1.20-1.65). Findings were consistent with a dose-response effect, with greater risk in people who used cannabis most frequently (2.09, 1.54-2.84). Results of analyses restricted to studies of more clinically relevant psychotic disorders were similar. Depression, suicidal thoughts, and anxiety outcomes were examined separately. Findings for these outcomes were less consistent, and fewer attempts were made to address non-causal explanations, than for psychosis. A substantial confounding effect was present for both psychotic and affective outcomes. The evidence is consistent with the view that cannabis increases risk of psychotic outcomes independently of confounding and transient intoxication effects, although evidence for affective outcomes is less strong. The uncertainty about whether cannabis causes psychosis is unlikely to be resolved by further longitudinal studies such as those reviewed here. However, we conclude that there is now sufficient evidence to warn young people that using cannabis could increase their risk of developing a psychotic illness later in life.

these authors contributed equally to this work