Microangiopathic Hemolytic Anemia as the First Manifestation of Metastatic Signet Ring Cell Carcinoma of Unknown Origin: A Case Report and Review of Literature 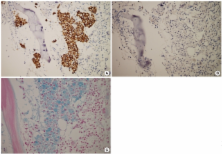 Microangiopathic hemolytic anemia (MAHA) occurs occasionally as a paraneoplastic syndrome in some solid tumors, but MAHA accompanied by signet ring cell carcinoma of an unknown origin is very rare. In this study, we present the case of an 80-yr-old man who was admitted to the hospital because of a 1-month history of lower back pain and dyspnea. He was diagnosed with MAHA on the basis of the laboratory findings that revealed anemia with schistocytes, decreased haptoglobin levels, and a negative direct Coombs' test. Bone marrow examination, which was performed because of the progression of anemia, revealed bone marrow metastases of signet ring cell carcinoma with extensive bone marrow necrosis. However, the primary origin of this signet ring cell carcinoma was not found. When the cause of progressive MAHA is unknown, the possibility of cancer-associated MAHA must be excluded by performing additional tumor workup, including the detection of tumor markers, gastric and colorectal endoscopic examinations, bone marrow examinations, and positron emission tomography-computed tomography or bone scans.

Cytokeratins 20 and 7 as biomarkers: usefulness in discriminating primary from metastatic adenocarcinoma.

T. Tot (2002)
Metastatic adenocarcinoma from an unknown primary site is a common clinical problem. The use of cytokeratins 20 (CK20) and 7 (CK7) was proposed to identify the primary sites in this situation. In this review, the results of 29 studies were summarised and the difficulties of data comparison described. Most tumours retained the CK20 phenotype during metastasis, but lung, non-mucinous ovarian, and gastric adenocarcinomas showed statistically significant differences in CK20 expression in the reported primary and metastatic cases. Ductal breast carcinomas, lung and non-mucinous ovarian adenocarcinomas showed significant differences in CK7 expression when primary and metastatic tumours were compared. CK20 positivity alone indicates metastatic spread of adenocarcinoma in several organs. CK7 negativity is consistent with metastases of adenocarcinomas in the lungs, ovaries, liver or serous membranes. CK20/7 phenotyping of adenocarcinomas is a useful diagnostic tool if based on algorithmic and probabilistic approaches and a detailed database.

The bone marrow aspirate and biopsy in the diagnosis of unsuspected nonhematologic malignancy: A clinical study of 19 cases

Fahir Ozkalemkas,  Rıdvan Ali,  Vildan Ozkocaman … (2005)
Background Although bone marrow metastases can be found commonly in some malignant tumors, diagnosing a nonhematologic malignancy from marrow is not a usual event. Methods To underscore the value of bone marrow aspiration and biopsy as a short cut in establishing a diagnosis for disseminated tumors, we reviewed 19 patients with nonhematologic malignancies who initially had diagnosis from bone marrow. Results The main indications for bone marrow examination were microangiopathic hemolytic anemia (MAHA), leukoerythroblastosis (LEB) and unexplained cytopenias. Bone marrow aspiration was not diagnostic due to dry tap or inadequate material in 6 cases. Biopsy results were parallel to the cytological ones in all cases except one; however a meticulous second examination of the biopsy confirmed the cytologic diagnosis in this patient too. The most common histologic subtype was adenocarcinoma, and after all the clinical and laboratory evaluations, the primary focus was disclosed definitively in ten patients (5 stomach, 3 prostate, 1 lung, 1 muscle) and probably in four patients (3 gastrointestinal tract, 1 lung). All work up failed in five patients and these cases were classified as tumor of unknown origin (TUO). Conclusion Our series showed that anemia, thrombocytopenia, elevated red cell distribution width (RDW) and hypoproteinemia formed a uniform tetrad in patients with disseminated tumors that were diagnosed via bone marrow examination. The prognosis of patients was very poor and survivals were only a few days or weeks (except for 4 patients whose survivals were longer). We concluded that MAHA, LEB and unexplained cytopenias are strong indicators of the necessity of bone marrow examination. Because of the very short survival of many patients, all investigational procedures should be judged in view of their rationality, and should be focused on treatable primary tumors.