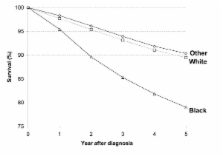 Previous studies have documented lower breast cancer survival among women with lower socioeconomic status (SES) in the United States. In this study, I examined the extent to which socioeconomic disparity in breast cancer survival was explained by stage at diagnosis, treatment, race and rural/urban residence using the Surveillance, Epidemiology, and End Results (SEER) data.

Women diagnosed with breast cancer during 1998-2002 in the 13 SEER cancer registry areas were followed-up to the end of 2005. The association between an area-based measure of SES and cause-specific five-year survival was estimated using Cox regression models. Six models were used to assess the extent to which SES differences in survival were explained by clinical and demographical factors. The base model estimated the hazard ratio (HR) by SES only and then additional adjustments were made sequentially for: 1) age and year of diagnosis; 2) stage at diagnosis; 3) first course treatment; 4) race; and 5) rural/urban residence.

An inverse association was found between SES and risk of dying from breast cancer (p < 0.0001). As area-level SES falls, HR rises (1.00 → 1.05 → 1.23 → 1.31) with the two lowest SES groups having statistically higher HRs. This SES differential completely disappeared after full adjustment for clinical and demographical factors (p = 0.20).

Geocoding and monitoring of US socioeconomic inequalities in mortality and cancer incidence: does the choice of area-based measure and geographic level matter?: the Public Health Disparities Geocoding Project.

N Krieger (2002)
Despite the promise of geocoding and use of area-based socioeconomic measures to overcome the paucity of socioeconomic data in US public health surveillance systems, no consensus exists as to which measures should be used or at which level of geography. The authors generated diverse single-variable and composite area-based socioeconomic measures at the census tract, block group, and zip code level for Massachusetts (1990 population: 6,016,425) and Rhode Island (1990 population: 1,003,464) to investigate their associations with mortality rates (1989-1991: 156,366 resident deaths in Massachusetts and 27,291 in Rhode Island) and incidence of primary invasive cancer (1988-1992: 140,610 resident cases in Massachusetts; 1989-1992: 19,808 resident cases in Rhode Island). Analyses of all-cause and cause-specific mortality rates and all-cause and site-specific cancer incidence rates indicated that: 1) block group and tract socioeconomic measures performed comparably within and across both states, but zip code measures for several outcomes detected no gradients or gradients contrary to those observed with tract and block group measures; 2) similar gradients were detected with categories generated by quintiles and by a priori categorical cutpoints; and 3) measures including data on economic poverty were most robust and detected gradients that were unobserved using measures of only education and wealth.

Origins of socio-economic inequalities in cancer survival: a review.

Annual report to the nation on the status of cancer, 1975-2002, featuring population-based trends in cancer treatment.

Lynn A. G. Ries,  Joan Warren,  Patricia Jamison … (2005)
The American Cancer Society (ACS), the Centers for Disease Control and Prevention (CDC), the National Cancer Institute (NCI), and the North American Association of Central Cancer Registries (NAACCR) collaborate annually to provide information on cancer rates and trends in the United States. This year's report updates statistics on the 15 most common cancers in the five major racial/ethnic populations in the United States for 1992-2002 and features population-based trends in cancer treatment. The NCI, the CDC, and the NAACCR provided information on cancer cases, and the CDC provided information on cancer deaths. Reported incidence and death rates were age-adjusted to the 2000 U.S. standard population, annual percent change in rates for fixed intervals was estimated by linear regression, and annual percent change in trends was estimated with joinpoint regression analysis. Population-based treatment data were derived from the Surveillance, Epidemiology, and End Results (SEER) Program registries, SEER-Medicare linked databases, and NCI Patterns of Care/Quality of Care studies. Among men, the incidence rates for all cancer sites combined were stable from 1995 through 2002. Among women, the incidence rates increased by 0.3% annually from 1987 through 2002. Death rates in men and women combined decreased by 1.1% annually from 1993 through 2002 for all cancer sites combined and also for many of the 15 most common cancers. Among women, lung cancer death rates increased from 1995 through 2002, but lung cancer incidence rates stabilized from 1998 through 2002. Although results of cancer treatment studies suggest that much of contemporary cancer treatment for selected cancers is consistent with evidence-based guidelines, they also point to geographic, racial, economic, and age-related disparities in cancer treatment. Cancer death rates for all cancer sites combined and for many common cancers have declined at the same time as the dissemination of guideline-based treatment into the community has increased, although this progress is not shared equally across all racial and ethnic populations. Data from population-based cancer registries, supplemented by linkage with administrative databases, are an important resource for monitoring the quality of cancer treatment. Use of this cancer surveillance system, along with new developments in medical informatics and electronic medical records, may facilitate monitoring of the translation of basic science and clinical advances to cancer prevention, detection, and uniformly high quality of care in all areas and populations of the United States.