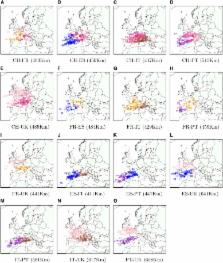 Ancestry analysis from genetic data plays a critical role in studies of human disease and evolution. Recent work has introduced explicit models for the geographic distribution of genetic variation and has shown that such explicit models yield superior accuracy in ancestry inference over nonmodel-based methods. Here we extend such work to introduce a method that models admixture between ancestors from multiple sources across a geographic continuum. We devise efficient algorithms based on hidden Markov models to localize on a map the recent ancestors ( e.g., grandparents) of admixed individuals, joint with assigning ancestry at each locus in the genome. We validate our methods by using empirical data from individuals with mixed European ancestry from the Population Reference Sample study and show that our approach is able to localize their recent ancestors within an average of 470 km of the reported locations of their grandparents. Furthermore, simulations from real Population Reference Sample genotype data show that our method attains high accuracy in localizing recent ancestors of admixed individuals in Europe (an average of 550 km from their true location for localization of two ancestries in Europe, four generations ago). We explore the limits of ancestry localization under our approach and find that performance decreases as the number of distinct ancestries and generations since admixture increases. Finally, we build a map of expected localization accuracy across admixed individuals according to the location of origin within Europe of their ancestors.

The landscape of recombination in African Americans

Anjali Hinch,  Arti Tandon,  Nick Patterson … (2011)
Recombination, together with mutation, is the ultimate source of genetic variation in populations. We leverage the recent mixture of people of African and European ancestry in the Americas to build a genetic map measuring the probability of crossing-over at each position in the genome, based on about 2.1 million crossovers in 30,000 unrelated African Americans. At intervals of more than three megabases it is nearly identical to a map built in Europeans. At finer scales it differs significantly, and we identify about 2,500 recombination hotspots that are active in people of West African ancestry but nearly inactive in Europeans. The probability of a crossover at these hotspots is almost fully controlled by the alleles an individual carries at PRDM9 (P<10−245). We identify a 17 base pair DNA sequence motif that is enriched in these hotspots, and is an excellent match to the predicted binding target of African-enriched alleles of PRDM9.

Reconstructing the Population Genetic History of the Caribbean