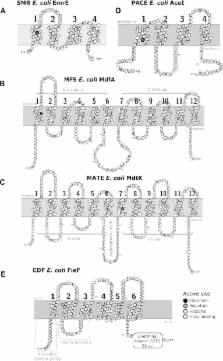 Journal: The Journal of Membrane Biology

Bacterial resistance to biocides used as antiseptics, dyes, and disinfectants is a growing concern in food preparation, agricultural, consumer manufacturing, and health care industries, particularly among Gram-negative Enterobacteriaceae, some of the most common community and healthcare-acquired bacterial pathogens. Biocide resistance is frequently associated with antimicrobial cross-resistance leading to reduced activity and efficacy of both antimicrobials and antiseptics. Multidrug resistant efflux pumps represent an important biocide resistance mechanism in Enterobacteriaceae. An assortment of structurally diverse efflux pumps frequently co-exist in these species and confer both unique and overlapping biocide and antimicrobial selectivity. TolC-dependent multicomponent systems that span both the plasma and outer membranes have been shown to confer clinically significant resistance to most antimicrobials including many biocides, however, a growing number of single component TolC-independent multidrug resistant efflux pumps are specifically associated with biocide resistance: small multidrug resistance (SMR), major facilitator superfamily (MFS), multidrug and toxin extruder (MATE), cation diffusion facilitator (CDF), and proteobacterial antimicrobial compound efflux (PACE) families. These efflux systems are a growing concern as they are rapidly spread between members of Enterobacteriaceae on conjugative plasmids and mobile genetic elements, emphasizing their importance to antimicrobial resistance. In this review, we will summarize the known biocide substrates of these efflux pumps, compare their structural relatedness, Enterobacteriaceae distribution, and significance. Knowledge gaps will be highlighted in an effort to unravel the role that these apparent “lone wolves” of the efflux-mediated resistome may offer.

Erik L. L. Sonnhammer,  Mats Larsson,  G Segond … (2001)
We describe and validate a new membrane protein topology prediction method, TMHMM, based on a hidden Markov model. We present a detailed analysis of TMHMM's performance, and show that it correctly predicts 97-98 % of the transmembrane helices. Additionally, TMHMM can discriminate between soluble and membrane proteins with both specificity and sensitivity better than 99 %, although the accuracy drops when signal peptides are present. This high degree of accuracy allowed us to predict reliably integral membrane proteins in a large collection of genomes. Based on these predictions, we estimate that 20-30 % of all genes in most genomes encode membrane proteins, which is in agreement with previous estimates. We further discovered that proteins with N(in)-C(in) topologies are strongly preferred in all examined organisms, except Caenorhabditis elegans, where the large number of 7TM receptors increases the counts for N(out)-C(in) topologies. We discuss the possible relevance of this finding for our understanding of membrane protein assembly mechanisms. A TMHMM prediction service is available at http://www.cbs.dtu.dk/services/TMHMM/. Copyright 2001 Academic Press.

Andrew M Waterhouse,  James B. Procter,  David Martin … (2009)
Summary: Jalview Version 2 is a system for interactive WYSIWYG editing, analysis and annotation of multiple sequence alignments. Core features include keyboard and mouse-based editing, multiple views and alignment overviews, and linked structure display with Jmol. Jalview 2 is available in two forms: a lightweight Java applet for use in web applications, and a powerful desktop application that employs web services for sequence alignment, secondary structure prediction and the retrieval of alignments, sequences, annotation and structures from public databases and any DAS 1.53 compliant sequence or annotation server. Availability: The Jalview 2 Desktop application and JalviewLite applet are made freely available under the GPL, and can be downloaded from www.jalview.org Contact: g.j.barton@dundee.ac.uk

Philip S. Levin,  Sumanth Gandra,  Jacobus P. van Wouwe … (2014)
Antibiotic drug consumption is a major driver of antibiotic resistance. Variations in antibiotic resistance across countries are attributable, in part, to different volumes and patterns for antibiotic consumption. We aimed to assess variations in consumption to assist monitoring of the rise of resistance and development of rational-use policies and to provide a baseline for future assessment. With use of sales data for retail and hospital pharmacies from the IMS Health MIDAS database, we reviewed trends for consumption of standard units of antibiotics between 2000 and 2010 for 71 countries. We used compound annual growth rates to assess temporal differences in consumption for each country and Fourier series and regression methods to assess seasonal differences in consumption in 63 of the countries. Between 2000 and 2010, consumption of antibiotic drugs increased by 36% (from 54 083 964 813 standard units to 73 620 748 816 standard units). Brazil, Russia, India, China, and South Africa accounted for 76% of this increase. In most countries, antibiotic consumption varied significantly with season. There was increased consumption of carbapenems (45%) and polymixins (13%), two last-resort classes of antibiotic drugs. The rise of antibiotic consumption and the increase in use of last-resort antibiotic drugs raises serious concerns for public health. Appropriate use of antibiotics in developing countries should be encouraged. However, to prevent a striking rise in resistance in low-income and middle-income countries with large populations and to preserve antibiotic efficacy worldwide, programmes that promote rational use through coordinated efforts by the international community should be a priority. US Department of Homeland Security, Bill & Melinda Gates Foundation, US National Institutes of Health, Princeton Grand Challenges Program. Copyright © 2014 Elsevier Ltd. All rights reserved.