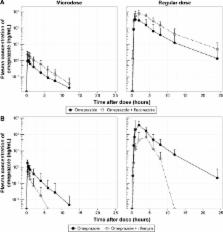 A microdose drug–drug interaction (DDI) study may be a valuable tool for anticipating drug interaction at therapeutic doses. This study aimed to compare the magnitude of DDIs at microdoses and regular doses to explore the applicability of a microdose DDI study.

Six healthy male volunteer subjects were enrolled into each DDI study of omeprazole (victim) and known perpetrators: fluconazole (inhibitor) and rifampin (inducer). For both studies, the microdose (100 μg, cold compound) and the regular dose (20 mg) of omeprazole were given at days 0 and 1, respectively. On days 2–9, the inhibitor or inducer was given daily, and the microdose and regular dose of omeprazole were repeated at days 8 and 9, respectively. Full omeprazole pharmacokinetic samplings were performed at days 0, 1, 8, and 9 of both studies for noncompartmental analysis.

Our results may be used as partial evidence that microdose DDI studies may replace regular-dose studies, or at least be used for DDI-screening purposes.

Akira Hishida,  Akiko Shichishima-Nakamura,  Takahisa Furuta … (2005)
Proton pump inhibitors (PPIs), such as omeprazole, lansoprazole, rabeprazole, esomeprazole, and pantoprazole, are mainly metabolized by CYP2C19 in the liver. There are genetically determined differences in the activity of this enzyme. The genotypes of CYP2C19 are classified into the three groups, rapid extensive metabolizer (RM), intermediate metabolizer (IM), and poor metabolizer (PM). The pharmacokinetics and pharmacodynamics of PPIs depend on CYP2C19 genotype status. Plasma PPI levels and intragastric pHs during PPI treatment in the RM group are lowest, those in the IM group come next, and those in the PM group are highest of the three groups. These CYP2C19 genotype-dependent differences in pharmacokinetics and pharmacodynamics of PPIs influence the cure rates for the gastro-esophageal reflux disease and H. pylori infection by PPI-based therapies. For the better PPI-based treatment, doses and dosing schemes of PPIs should be optimized based on CYP2C19 genotype status.

Microdosing and drug development: past, present and future.

Graham Lappin,  Robert Noveck,  Tal Burt (2013)
Microdosing is an approach to early drug development where exploratory pharmacokinetic data are acquired in humans using inherently safe sub-pharmacologic doses of drug. The first publication of microdose data was 10 years ago and this review comprehensively explores the microdose concept from conception, over the past decade, up until the current date.

A nanogram dose of the CYP3A probe substrate midazolam to evaluate drug interactions.

B Halama,  Miriam S. N. Hohmann,  H Burhenne … (2013)
The objective of the study was to establish an in vivo method for assessing cytochrome P450 3A (CYP3A) activity using therapeutically inert nanogram doses of midazolam. We administered four escalating single doses of oral midazolam (0.0001-3 mg) to 12 healthy participants, stratified according to CYP3A5 carrier status, to assess pharmacokinetics linearity. We then evaluated the interactions with the CYP3A inhibitor ketoconazole (400 mg q.d.) after nanogram and regular doses of midazolam. Area under the plasma concentration-time curve (AUC) and peak plasma concentration (C(max)) were linear over the entire range of doses. Ketoconazole reduced midazolam oral clearance by 92.8%. AUC and C(max) increased by 1,540 and 363%, respectively. CYP3A5 carrier status had no influence on midazolam oral clearance or its inhibition by ketoconazole. This is the first study showing that midazolam pharmacokinetics is linear in a 30,000-fold concentration range, and therefore that nano- and microgram doses of midazolam can reliably predict the pharmacokinetics of midazolam in therapeutic doses and can be used to assess CYP3A activity even in the presence of strong CYP3A inhibitors.