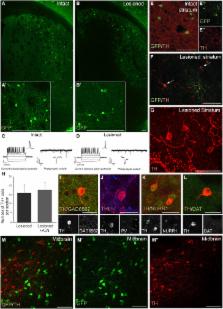 Converting resident glia into functional and subtype-specific neurons in vivo by delivering reprogramming genes directly to the brain provides a step forward toward the possibility of treating brain injuries or diseases. To date, it has been possible to obtain GABAergic and glutamatergic neurons via in vivo conversion, but the precise phenotype of these cells has not yet been analyzed in detail. Here, we show that neurons reprogrammed using Ascl1, Lmx1a, and Nurr1 functionally mature and integrate into existing brain circuitry and that the majority of the reprogrammed neurons have properties of fast-spiking, parvalbumin-containing interneurons. When testing different combinations of genes for neural conversion with a focus on pro-neural genes and dopamine fate determinants, we found that functional neurons can be generated using different gene combinations and in different brain regions and that most of the reprogrammed neurons become interneurons, independently of the combination of reprogramming factors used.

In this study, Parmar, Ottosson, and colleagues show how endogenous NG2 glia can be reprogrammed into GABAergic interneurons of different subtypes, the majority of them with properties of fast-spiking parvalbumin-containing interneurons. This neuronal subtype has been implicated in several neurological diseases, and the findings can open up new therapeutic options.

Direct conversion of fibroblasts to functional neurons by defined factors

Thomas Vierbuchen,  Austin Ostermeier,  Zhiping Pang … (2010)
Cellular differentiation and lineage commitment are considered robust and irreversible processes during development. Recent work has shown that mouse and human fibroblasts can be reprogrammed to a pluripotent state with a combination of four transcription factors. This raised the question of whether transcription factors could directly induce other defined somatic cell fates, and not only an undifferentiated state. We hypothesized that combinatorial expression of neural lineage-specific transcription factors could directly convert fibroblasts into neurons. Starting from a pool of nineteen candidate genes, we identified a combination of only three factors, Ascl1, Brn2, and Myt1l, that suffice to rapidly and efficiently convert mouse embryonic and postnatal fibroblasts into functional neurons in vitro. These induced neuronal (iN) cells express multiple neuron-specific proteins, generate action potentials, and form functional synapses. Generation of iN cells from non-neural lineages could have important implications for studies of neural development, neurological disease modeling, and regenerative medicine.

In vivo direct reprogramming of reactive glial cells into functional neurons after brain injury and in an Alzheimer's disease model.

Yuchen Chen,  Zheng Wu,  Lei Zhang … (2014)
Loss of neurons after brain injury and in neurodegenerative disease is often accompanied by reactive gliosis and scarring, which are difficult to reverse with existing treatment approaches. Here, we show that reactive glial cells in the cortex of stab-injured or Alzheimer's disease (AD) model mice can be directly reprogrammed into functional neurons in vivo using retroviral expression of a single neural transcription factor, NeuroD1. Following expression of NeuroD1, astrocytes were reprogrammed into glutamatergic neurons, while NG2 cells were reprogrammed into glutamatergic and GABAergic neurons. Cortical slice recordings revealed both spontaneous and evoked synaptic responses in NeuroD1-converted neurons, suggesting that they integrated into local neural circuits. NeuroD1 expression was also able to reprogram cultured human cortical astrocytes into functional neurons. Our studies therefore suggest that direct reprogramming of reactive glial cells into functional neurons in vivo could provide an alternative approach for repair of injured or diseased brain. Copyright © 2014 Elsevier Inc. All rights reserved.

Hierarchical mechanisms for direct reprogramming of fibroblasts to neurons.

Anne-Christine Brunet,  Thomas Vierbuchen,  Pearl Y. Ng … (2013)
Direct lineage reprogramming is a promising approach for human disease modeling and regenerative medicine, with poorly understood mechanisms. Here, we reveal a hierarchical mechanism in the direct conversion of fibroblasts into induced neuronal (iN) cells mediated by the transcription factors Ascl1, Brn2, and Myt1l. Ascl1 acts as an "on-target" pioneer factor by immediately occupying most cognate genomic sites in fibroblasts. In contrast, Brn2 and Myt1l do not access fibroblast chromatin productively on their own; instead, Ascl1 recruits Brn2 to Ascl1 sites genome wide. A unique trivalent chromatin signature in the host cells predicts the permissiveness for Ascl1 pioneering activity among different cell types. Finally, we identified Zfp238 as a key Ascl1 target gene that can partially substitute for Ascl1 during iN cell reprogramming. Thus, a precise match between pioneer factors and the chromatin context at key target genes is determinative for transdifferentiation to neurons and likely other cell types. Copyright © 2013 Elsevier Inc. All rights reserved.