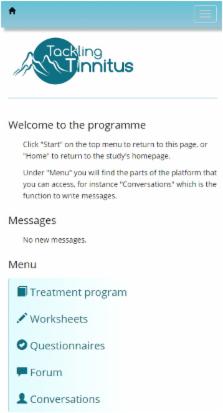 The purpose of this article is to describe an internet-based platform for improving symptoms and quality of life for people with psychological and behavioural health problems such as depression, anxiety, phobia, psychological trauma, hearing loss and tinnitus. The online platform, called Iterapi, was developed at the Department of Behavioural Sciences and Learning at Linköping University, Sweden and has been running for nearly two decades and used in many randomized controlled trials and outpatient treatments.

The intention of this article is to share our experience with developing such a treatment solution and the process flow and elements of running internet-based psychological interventions. This will likely be of use to developers building similar services, therapists considering integrating such approaches in their practices and institutions, as well as researchers curious about the functions included on the platform and methodology used for running studies.

We describe the security aspects of the platform, central concepts underlying its development, how the platform can be used in a study or treatment and the main features and functions the platform offers. We comment on practical considerations regarding blending of methods within the platform, such as self-help treatments with asynchronous communication and real-time text chat and video conversations. We also point out the advantages of using Internet-assisted treatments, the challenges that we have faced and future planned upgrades.

Due to continuous development of the platform, its user-friendliness, accessibility across devices and numerous features, many research colleagues from Sweden as well as other countries such as Germany, United Kingdom, Romania and Israel have chosen to implement their own studies on the platform.

Per Carlbring,  Erik Hedman,  Heleen Riper … (2014)
Internet-delivered cognitive behavior therapy (ICBT) has been tested in many research trials, but to a lesser extent directly compared to face-to-face delivered cognitive behavior therapy (CBT). We conducted a systematic review and meta-analysis of trials in which guided ICBT was directly compared to face-to-face CBT. Studies on psychiatric and somatic conditions were included. Systematic searches resulted in 13 studies (total N=1053) that met all criteria and were included in the review. There were three studies on social anxiety disorder, three on panic disorder, two on depressive symptoms, two on body dissatisfaction, one on tinnitus, one on male sexual dysfunction, and one on spider phobia. Face-to-face CBT was either in the individual format (n=6) or in the group format (n=7). We also assessed quality and risk of bias. Results showed a pooled effect size (Hedges' g) at post-treatment of -0.01 (95% CI: -0.13 to 0.12), indicating that guided ICBT and face-to-face treatment produce equivalent overall effects. Study quality did not affect outcomes. While the overall results indicate equivalence, there are still few studies for each psychiatric and somatic condition and many conditions for which guided ICBT has not been compared to face-to-face treatment. Thus, more research is needed to establish equivalence of the two treatment formats. Copyright © 2014 World Psychiatric Association.

Helen Christensen,  Jeffrey K Griffiths (2007)
To discuss, using two case examples, the potential utility of Internet-based depression information and automated therapy programs in rural regions. Systematic review of evaluations of two Australian web-based mental health programs: MoodGYM and BluePages Depression Information. Community, school, university. A total of 12 papers and reports derived from nine separate studies of MoodGYM and BluePages involving sample sizes ranging from 78 to 19 607 people. Depressive symptoms, anxiety symptoms, dysfunctional thoughts, depression literacy, stigma, help seeking and cost-effectiveness. Internet-based applications were effective in reducing depressive symptoms and stigmatising attitudes to depression and in improving depression literacy. School-based programs also showed promise in decreasing depressive symptoms. Depression self-help and information programs can be delivered effectively by means of the Internet. As accessibility of face-to-face mental health services in rural areas is poor and as there is a strong culture of self-reliance and preference for self-managing health problems among rural residents, the Internet might offer an important platform for the delivery of help for depression in rural regions. Consideration should be given to developing programs tailored to rural settings and future research should evaluate the efficacy and effectiveness of such programs in rural settings.