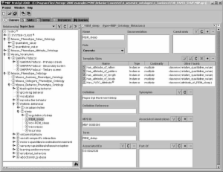 By combining ontologies from different sources the authors developed a novel approach to describing phenotypes of mutant mice in a standard, structured manner.

The mouse is an important model of human genetic disease. Describing phenotypes of mutant mice in a standard, structured manner that will facilitate data mining is a major challenge for bioinformatics. Here we describe a novel, compositional approach to this problem which combines core ontologies from a variety of sources. This produces a framework with greater flexibility, power and economy than previous approaches. We discuss some of the issues this approach raises.

Emily Dimmer,  Rolf Apweiler,  Vivian Lee … (2004)
The Gene Ontology Annotation (GOA) database (http://www.ebi.ac.uk/GOA) aims to provide high-quality electronic and manual annotations to the UniProt Knowledgebase (Swiss-Prot, TrEMBL and PIR-PSD) using the standardized vocabulary of the Gene Ontology (GO). As a supplementary archive of GO annotation, GOA promotes a high level of integration of the knowledge represented in UniProt with other databases. This is achieved by converting UniProt annotation into a recognized computational format. GOA provides annotated entries for nearly 60,000 species (GOA-SPTr) and is the largest and most comprehensive open-source contributor of annotations to the GO Consortium annotation effort. By integrating GO annotations from other model organism groups, GOA consolidates specialized knowledge and expertise to ensure the data remain a key reference for up-to-date biological information. Furthermore, the GOA database fully endorses the Human Proteomics Initiative by prioritizing the annotation of proteins likely to benefit human health and disease. In addition to a non-redundant set of annotations to the human proteome (GOA-Human) and monthly releases of its GO annotation for all species (GOA-SPTr), a series of GO mapping files and specific cross-references in other databases are also regularly distributed. GOA can be queried through a simple user-friendly web interface or downloaded in a parsable format via the EBI and GO FTP websites. The GOA data set can be used to enhance the annotation of particular model organism or gene expression data sets, although increasingly it has been used to evaluate GO predictions generated from text mining or protein interaction experiments. In 2004, the GOA team will build on its success and will continue to supplement the functional annotation of UniProt and work towards enhancing the ability of scientists to access all available biological information. Researchers wishing to query or contribute to the GOA project are encouraged to email: goa@ebi.ac.uk.

The Mammalian Phenotype Ontology as a tool for annotating, analyzing and comparing phenotypic information