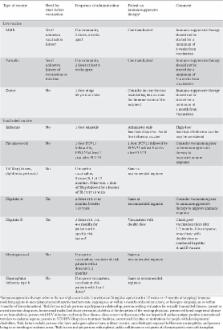 The increasing number of older patients (age ≥60 years) with inflammatory bowel disease (IBD) highlights the importance of healthcare maintenance in this vulnerable population. Older IBD patients are more susceptible and have higher rates of many disease- and treatment-related adverse effects. Compared to younger IBD patients, older patients are at increased risk for infection, malignancy, bone disease, eye disease, malnutrition and thrombotic complications. Preventive strategies in the elderly differ from those in younger adults and are imperative. Changes to the immune system with aging can decrease the efficacy of vaccinations. Cancer screening guidelines in older IBD patients have to account for unique considerations, such as life expectancy, functional performance status, multimorbidity, financial status, and patient desires. Additionally, providers need to be vigilant in screening for osteoporosis, ocular disease, depression, and adverse events arising from polypharmacy.

Increasing incidence and prevalence of the inflammatory bowel diseases with time, based on systematic review.

Antibody response to influenza vaccination in the elderly: a quantitative review.

Lone Simonsen,  Cecile Viboud,  Frederick K Goodwin (2006)
We performed a quantitative review of 31 vaccine antibody response studies conducted from 1986 to 2002 and compared antibody responses to influenza vaccine in groups of elderly versus younger adults. We did a weighted analysis of the probability of vaccine response (measured as seroconversion and seroprotection) for each vaccine component (H1, H3 and B antigens). Using a multiple regression model, we adjusted for factors that might affect the vaccine response. The adjusted odds-ratio (OR) of responses in elderly versus young adults ranged from 0.24 to 0.59 in terms of seroconversion and seroprotection to all three antigens. The CDC estimates of 70-90% clinical vaccine efficacy in young adults and these estimates suggest a corresponding clinical efficacy in the elderly of 17-53% depending on circulating viruses. We conclude that the antibody response in the elderly is considerably lower than in younger adults. This highlights the need for more immunogenic vaccine formulations for the elderly.

Guidelines for colorectal cancer screening and surveillance in moderate and high risk groups (update from 2002).

Roger G. Evans,  Anneke Lucassen,  Christopher Woodhouse … (2010)
The British Society of Gastroenterology (BSG) and the Association of Coloproctology for Great Britain and Ireland (ACPGBI) commissioned this update of the 2002 guidance. The aim, as before, is to provide guidance on the appropriateness, method and frequency of screening for people at moderate and high risk from colorectal cancer. This guidance provides some new recommendations for those with inflammatory bowel disease and for those at moderate risk resulting from a family history of colorectal cancer. In other areas guidance is relatively unchanged, but the recent literature was reviewed and is included where appropriate.