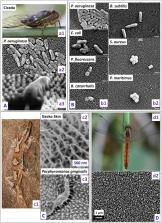 Bacterial antibiotic resistance is becoming more widespread due to excessive use of antibiotics in healthcare and agriculture. At the same time the development of new antibiotics has effectively ground to a hold. Chemical modifications of material surfaces have poor long-term performance in preventing bacterial build-up and hence approaches for realising bactericidal action through physical surface topography have become increasingly important in recent years. The complex nature of the bacteria cell wall interactions with nanostructured surfaces represents many challenges while the design of nanostructured bactericidal surfaces is considered. Here we present a brief overview of the bactericidal behaviour of naturally occurring and bio-inspired nanostructured surfaces against different bacteria through the physico-mechanical rupture of the cell wall. Many parameters affect this process including the size, shape, density, rigidity/flexibility and surface chemistry of the surface nanotextures as well as factors such as bacteria specificity (e.g. gram positive and gram negative) and motility. Different fabrication methods for such bactericidal nanostructured surfaces are summarised.

Antifouling coatings: recent developments in the design of surfaces that prevent fouling by proteins, bacteria, and marine organisms.

Indrani Banerjee, Ravindra Pangule, Ravi Kane (2011)
The major strategies for designing surfaces that prevent fouling due to proteins, bacteria, and marine organisms are reviewed. Biofouling is of great concern in numerous applications ranging from biosensors to biomedical implants and devices, and from food packaging to industrial and marine equipment. The two major approaches to combat surface fouling are based on either preventing biofoulants from attaching or degrading them. One of the key strategies for imparting adhesion resistance involves the functionalization of surfaces with poly(ethylene glycol) (PEG) or oligo(ethylene glycol). Several alternatives to PEG-based coatings have also been designed over the past decade. While protein-resistant coatings may also resist bacterial attachment and subsequent biofilm formation, in order to overcome the fouling-mediated risk of bacterial infection it is highly desirable to design coatings that are bactericidal. Traditional techniques involve the design of coatings that release biocidal agents, including antibiotics, quaternary ammonium salts (QAS), and silver, into the surrounding aqueous environment. However, the emergence of antibiotic- and silver-resistant pathogenic strains has necessitated the development of alternative strategies. Therefore, other techniques based on the use of polycations, enzymes, nanomaterials, and photoactive agents are being investigated. With regard to marine antifouling coatings, restrictions on the use of biocide-releasing coatings have made the generation of nontoxic antifouling surfaces more important. While considerable progress has been made in the design of antifouling coatings, ongoing research in this area should result in the development of even better antifouling materials in the future. Copyright © 2011 WILEY-VCH Verlag GmbH & Co. KGaA, Weinheim.

Biofilm formation in Staphylococcus implant infections. A review of molecular mechanisms and implications for biofilm-resistant materials.

Carla Renata Arciola, Davide Campoccia, Pietro Speziale … (2012)
Implant infections in orthopaedics, as well as in many other medical fields, are chiefly caused by staphylococci. The ability of growing within a biofilm enhances the chances of staphylococci to protect themselves from host defences, antibiotic therapies, and biocides. Advances in scientific knowledge on structural molecules (exopolysaccharide, proteins, teichoic acids, and the most recently described extracellular DNA), on the synthesis and genetics of staphylococcal biofilms, and on the complex network of signal factors that intervene in their control are here presented, also reporting on the emerging strategies to disrupt or inhibit them. The attitude of polymorphonuclear neutrophils and macrophages to infiltrate and phagocytise biofilms, as well as the ambiguous behaviour exhibited by these innate immune cells in biofilm-related implant infections, are here discussed. Research on anti-biofilm biomaterials is focused, reviewing materials loaded with antibacterial substances, or coated with anti-adhesive/anti-bacterial immobilized agents, or surfaced with nanostructures. Latter approaches appear promising, since they avoid the spread of antibacterial substances in the neighbouring tissues with the consequent risk of inducing bacterial resistance. Copyright © 2012 Elsevier Ltd. All rights reserved.

Elena Ivanova, Jafar Hasan, Hayden Webb … (2012)
Natural superhydrophobic surfaces are often thought to have antibiofouling potential due to their self-cleaning properties. However, when incubated on cicada wings, Pseudomonas aeruginosa cells are not repelled; instead they are penetrated by the nanopillar arrays present on the wing surface, resulting in bacterial cell death. Cicada wings are effective antibacterial, as opposed to antibiofouling, surfaces. Copyright © 2012 WILEY-VCH Verlag GmbH & Co. KGaA, Weinheim.