A real-life experience of sorafenib treatment for patients with advanced hepatocellular carcinoma: a retrospective analysis at Cathay General Hospital, 2007–2015 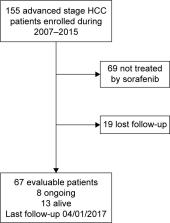 Sorafenib is an oral tyrosine kinase inhibitor that is indicated for advanced hepatocellular carcinoma (HCC). The aim of the present study was to determine the clinical outcomes of HCC patients receiving sorafenib in real-life clinical setting in comparison with formal clinical trials.

Patients diagnosed with advanced HCC between 2007 and 2015 at single institute were retrospectively enrolled and evaluated for survival and tolerability following sorafenib treatment. Overall survival (OS) and duration of treatment (TTP) were examined by different stratifications including age, gender, etiology, liver functions, and severities.

OS of advanced HCC patients treated with sorafenib was longer than that reported in the Asia-Pacific trial study. Impaired hepatic functions are associated with the shorter survival in real-life setting.

Fabio Piscaglia,  C Zavaglia,  Antonio Grieco … (2011)
A multicenter randomized controlled trial established sorafenib as a standard of care for patients with advanced hepatocellular carcinoma (HCC). Because the study was prematurely interrupted due to survival benefits in the sorafenib arm, we conducted an observational study to adequately assess risks and benefits of this regimen in field practice. Starting in 2008, all clinically compensated patients with advanced HCC and those with an intermediate HCC who were unfit or failed to respond to ablative therapies were consecutively evaluated in six liver centers in Italy, for tolerability as well as radiologic and survival response to 800-mg/d sorafenib therapy. Treatment was down-dosed or interrupted according to drug label. Two hundred ninety-six patients (88% Child-Pugh A, 75% Barcelona Clinic Liver Cancer [BCLC]-C, and 25% BCLC-B) received sorafenib for 3.8 months (95% CI 3.3-4.4). Two hundred sixty-nine (91%) patients experienced at least one adverse event (AE), whereas 161 (54%) had to reduce dosing. Treatment was interrupted in 103 (44%) for disease progression, in 95 (40%) for an AE, and in 38 (16%) for liver deterioration. The median survival was 10.5 months in the overall cohort, 8.4 months in BCLC-C versus 20.6 months in BCLC-B patients (P 70% of the time with a half dose versus 9.6 months in the 219 patients treated for >70% of the time with a full dose. At month 2 of treatment, the overall radiologic response was 8%. Eastern Cooperative Oncology Group performance status, macrovascular invasion, extrahepatic spread of the tumor, radiologic response at month 2, and sorafenib dosing were independent predictors of shortened survival. Overall, safety, effectiveness, and generalizability of sorafenib therapy in HCC was validated in field practice. The effectiveness of half-dosed sorafenib may have implications for tailored therapy. Copyright © 2011 American Association for the Study of Liver Diseases.

Giuseppe Montalto,  Melchiorre Cervello,  James A. McCubrey … (2012)
Sorafenib, a multikinase inhibitor, recently received FDA approval for the treatment of advanced hepatocellular carcinoma (HCC). However, as the clinical application of sorafenib evolves, there is increasing interest in defining the mechanisms underlying its anti-tumor activity. Considering that this specific inhibitor could target unexpected molecules depending on the biologic context, a precise understanding of its mechanism of action could be critical to maximize its treatment efficacy, while minimizing adverse effects. Two human HCC cell lines (HepG2 and Huh7), carrying different biological and genetic characteristics, were used in this study to examine the intracellular events leading to sorafenib-induced HCC cell-growth inhibition. Sorafenib inhibited cell growth in both cell lines in a dose- and time-dependent manner and significantly altered expression levels of 826 and 2011 transcripts in HepG2 and Huh7 cells, respectively. Genes functionally involved in angiogenesis, apoptosis, transcription regulation, signal transduction, protein biosynthesis and modification were predominantly upregulated, while genes implicated in cell cycle control, DNA replication recombination and repair, cell adhesion, metabolism and transport were mainly downregulated upon treatment. However, each sorafenib-treated HCC cell line displayed specificity in the expression and activity of crucial factors involved in hepatocarcinogenesis. The altered expression of some of these genes was confirmed by semiquantitative and quantitative RT-PCR and by western blotting. Many novel genes emerged from our transcriptomics analysis that had not previously been reported to be effected by sorafenib. Further functional analyses may determine whether these genes can serve as potential molecular targets for more effective anti-HCC strategies.

Suk Lim,  Norman Lee,  Ivana K. Kim … (2013)
To compare the time to progression (TTP) and overall survival (OS) in patients with advanced-stage hepatocellular carcinoma (HCC) who are undergoing sorafenib treatment combined with transarterial chemoembolization (TACE) versus sorafenib monotherapy. The retrospective analysis of the data was approved by the institutional review board, and the requirement to obtain informed consent was waived. Of 355 patients with advanced-stage HCC (Barcelona Clinic Liver Cancer stage C) who were undergoing sorafenib therapy for at least 5 weeks between April 2007 and July 2011, 164 (46.2%) underwent repeat TACE (or chemolipiodolization if indicated) along with sorafenib therapy (combined group); the remaining 191 patients (53.8%) received sorafenib alone (monotherapy group). The median patient age was 53 years (range, 22-84 years). The median age was 53 years (range, 26-84 years) for men and 56 years (range, 22-75 years) for women. Propensity score-based methods were used to minimize bias when evaluating TTP on the basis of modified Response Evaluation Criteria in Solid Tumors and OS. Statistical analysis was performed with the Kaplan-Meier method by using the log-rank test and Cox regression models. In the combined and monotherapy groups, respectively, 64.6% and 49.2% of patients had vascular invasion, 87.8% and 91.1% had extrahepatic metastasis, and 54.3% and 47.1% had both. During follow-up (median duration, 5.5 months), the median TTP and OS in the combined group were longer than those in the monotherapy group (TTP: 2.5 months vs 2.1 months, respectively, P = .008; OS: 8.9 months vs 5.9 months, P = .009). At univariate and subsequent multivariate analyses, additional TACE was an independent predictor of favorable TTP and OS (adjusted hazard ratio: 0.74 and 0.57, respectively; P < .05 for both), consistent with the outcomes of inverse probability of treatment weighting. In the propensity score-matched cohort (96 pairs), the median TTP in the combined group was significantly longer than that in the monotherapy group (2.7 months vs 2.1 months, respectively; P = .011), but median OS was not (9.1 months vs 6.7 months, P = .21). In this retrospective study, TACE plus sorafenib was superior to sorafenib alone with respect to TTP in patients with advanced-stage HCC, although it may or may not improve OS. http://radiology.rsna.org/lookup/suppl/doi:10.1148/radiol.13130150/-/DC1. RSNA, 2013