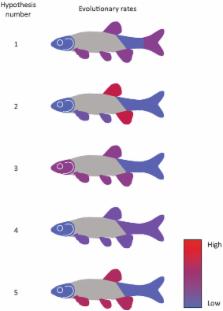 Modularity is considered a prerequisite for the evolvability of biological systems. This is because in theory, individual modules can follow quasi-independent evolutionary trajectories or evolve at different rates compared to other aspects of the organism. This may influence the potential of some modules to diverge, leading to differences in disparity. Here, we investigated this relationship between modularity, rates of morphological evolution and disparity using a phylogenetically diverse sample of ray-finned fishes. We compared the support for multiple hypotheses of evolutionary modularity and asked if the partitions delimited by the best-fitting models were also characterized by the highest evolutionary rate differentials. We found that an evolutionary module incorporating the dorsal, anal and paired fins was well supported by the data, and that this module evolves more rapidly and consequently generates more disparity than other modules. This suggests that modularity may indeed promote morphological disparity through differences in evolutionary rates across modules.

PERSPECTIVE: COMPLEX ADAPTATIONS AND THE EVOLUTION OF EVOLVABILITY.

Lee Altenberg, Günter P. Wagner (1996)
The problem of complex adaptations is studied in two largely disconnected research traditions: evolutionary biology and evolutionary computer science. This paper summarizes the results from both areas and compares their implications. In evolutionary computer science it was found that the Darwinian process of mutation, recombination and selection is not universally effective in improving complex systems like computer programs or chip designs. For adaptation to occur, these systems must possess "evolvability," i.e., the ability of random variations to sometimes produce improvement. It was found that evolvability critically depends on the way genetic variation maps onto phenotypic variation, an issue known as the representation problem. The genotype-phenotype map determines the variability of characters, which is the propensity to vary. Variability needs to be distinguished from variations, which are the actually realized differences between individuals. The genotype-phenotype map is the common theme underlying such varied biological phenomena as genetic canalization, developmental constraints, biological versatility, developmental dissociability, and morphological integration. For evolutionary biology the representation problem has important implications: how is it that extant species acquired a genotype-phenotype map which allows improvement by mutation and selection? Is the genotype-phenotype map able to change in evolution? What are the selective forces, if any, that shape the genotype-phenotype map? We propose that the genotype-phenotype map can evolve by two main routes: epistatic mutations, or the creation of new genes. A common result for organismic design is modularity. By modularity we mean a genotype-phenotype map in which there are few pleiotropic effects among characters serving different functions, with pleiotropic effects falling mainly among characters that are part of a single functional complex. Such a design is expected to improve evolvability by limiting the interference between the adaptation of different functions. Several population genetic models are reviewed that are intended to explain the evolutionary origin of a modular design. While our current knowledge is insufficient to assess the plausibility of these models, they form the beginning of a framework for understanding the evolution of the genotype-phenotype map.

THE EVOLUTION OF MORPHOLOGICAL DIVERSITY