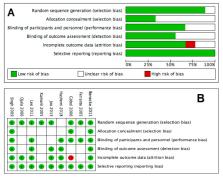 O Ardicoglu,  F Zengin,  A Kamanli … (2005)
Myofascial pain syndrome (MPS) is one of the most common causes of chronic musculoskeletal pain. Several methods have been recommended for the inactivation of trigger points (TrP). This prospective, single-blind study was proposed to compare TrP injection with botulinum toxin type A (BTX-A) to dry needling and lidocaine injection in MPS. Eighty-seven trigger points (cervical and/or periscapular regions) in 23 female and six male patients with MPS were treated and randomly assigned to three groups: lidocaine injection (n=10, 32 TrP), dry needling (n=10, 33 TrP), and BTX-A injection (n=9, 22 TrP). Clinical assessment including cervical range of motion, TrP pain pressure threshold (PPT), pain scores (PS), and visual analog scales for pain, fatigue, and work disability were evaluated at entry and the end of the 4th week. Additionally, depression and anxiety were evaluated with the Hamilton depression and anxiety rating scales, and quality of life was assessed using the Nottingham health profile (NHP). The subjects were also asked to describe side effects. INJECTION PROCEDURE: One milliliter of 0.5% lidocaine was administered to each TrP in the lidocaine injection group, 10-20 IU of BTX-A to each TrP in the BTX-A group, and dry needling to each TrP in the last group, followed by stretching of the muscle groups involved. The patients were instructed to continue their home exercise programs. Pain pressure thresholds and PS significantly improved in all three groups. In the lidocaine group, PPT values were significantly higher than in the dry needle group, and PS were significantly lower than in both the BTX-A and dry needle groups. In all, visual analog scores significantly decreased in the lidocaine injection and BTX-A groups and did not significantly change in the dry needle group. Disturbance during the injection procedure was lowest in the lidocaine injection group. Quality of life scores assessed by NHP significantly improved in the lidocaine and BTX-A groups but not in the dry needle group. Depression and anxiety scores significantly improved only in the BTX-A-injected group. Injection is more practical and rapid, since it causes less disturbance than dry needling and is more cost effective than BTX-A injection, and seems the treatment of choice in MPS. On the other hand, BTX-A could be selectively used in MPS patients resistant to conventional treatments.

Jianghui Meng,  Saak Ovsepian,  Jiafu Wang … (2009)
Excessive release of inflammatory/pain mediators from peripheral sensory afferents renders nerve endings hyper-responsive, causing central sensitization and chronic pain. Herein, the basal release of proinflammatory calcitonin gene-related peptide (CGRP) was shown to increase the excitability of trigeminal sensory neurons in brainstem slices via CGRP1 receptors because the effect was negated by an antagonist, CGRP8-37. This excitatory action could be prevented by cleaving synaptosomal-associated protein of M(r) 25,000 (SNAP-25) with botulinum neurotoxin (BoNT) type A, a potent inhibitor of exocytosis. Strikingly, BoNT/A proved unable to abolish the CGRP1 receptor-mediated effect of capsaicin, a nociceptive TRPV1 stimulant, or its elevation of CGRP release from trigeminal ganglionic neurons (TGNs) in culture. Although the latter was also not susceptible to BoNT/E, apparently attributable to a paucity of its acceptors (glycosylated synaptic vesicle protein 2 A/B), this was overcome by using a recombinant chimera (EA) of BoNT/A and BoNT/E. It bound effectively to the C isoform of SV2 abundantly expressed in TGNs and cleaved SNAP-25, indicating that its /A binding domain (H(C)) mediated uptake of the active /E protease. The efficacy of /EA is attributable to removal of 26 C-terminal residues from SNAP-25, precluding formation of SDS-resistant SNARE complexes. In contrast, exocytosis could be evoked after deleting nine of the SNAP-25 residues with /A but only on prolonged elevation of [Ca(2+)](i) with capsaicin. This successful targeting of /EA to nociceptive neurons and inhibition of CGRP release in vitro and in situ highlight its potential as a new therapy for sensory dysmodulation and chronic pain.