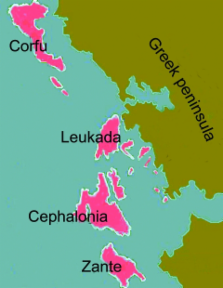 One-sentence summary for tables of contents: Measures taken by the Venetian administration to combat plague were successful.

During the 17th and 18th centuries, measures were taken by the Venetian administration to combat plague on the Ionian Islands. At that time, although the scientific basis of plague was unknown, the Venetians recognized its infectious nature and successfully decreased its spread by implementing an information network. Additionally, by activating a system of inspection that involved establishing garrisons along the coasts, the Venetians were able to control all local movements in plague-infested areas, which were immediately isolated. In contrast, the neighboring coast of mainland Greece, which was under Ottoman rule, was a plague-endemic area during the same period. We conclude that even in the absence of scientific knowledge, close observation and social and political measures can effectively restrain infectious outbreaks to the point of disappearance.

J. M. Girard,  D M Wagner,  A J Vogler … (2004)
Plague, the disease caused by the bacterium Yersinia pestis, has greatly impacted human civilization. Y. pestis is a successful global pathogen, with active foci on all continents except Australia and Antarctica. Because the Y. pestis genome is highly monomorphic, previous attempts to characterize the population genetic structure within a single focus have been largely unsuccessful. Here we report that highly mutable marker loci allow determination of Y. pestis population genetic structure and tracking of transmission patterns at two spatial scales within a single focus. In addition, we found that in vitro mutation rates for these loci are similar to those observed in vivo, which allowed us to develop a mutation-rate-based model to examine transmission mechanisms. Our model suggests there are two primary components of plague ecology: a rapid expansion phase for population growth and dispersal followed by a slower persistence phase. This pattern seems consistent across local, regional, and even global scales.

Yersinia infections: centennial of the discovery of the plague bacillus.

Exposure of small rodents to plague during epizootics in black-tailed prairie dogs.

J Salkeld,  Paul Stapp,  John Young … (2008)
Plague, caused by the bacterium Yersinia pestis, causes die-offs of colonies of prairie dogs (Cynomys ludovicianus). It has been argued that other small rodents are reservoirs for plague, spreading disease during epizootics and maintaining the pathogen in the absence of prairie dogs; yet there is little empirical support for distinct enzootic and epizootic cycles. Between 2004 and 2006, we collected blood from small rodents captured in colonies in northern Colorado before, during, and for up to 2 yr after prairie dog epizootics. We screened 1,603 blood samples for antibodies to Y. pestis, using passive hemagglutination and inhibition tests, and for a subset of samples we cultured blood for the bacterium itself. Of the four species of rodents that were common in colonies, the northern grasshopper mouse (Onychomys leucogaster) was the only species with consistent evidence of plague infection during epizootics, with 11.1-23.1% of mice seropositive for antibody to Y. pestis during these events. Seropositive grasshopper mice, thirteen-lined ground squirrels (Spermophilus tridecemlineatus), and deer mice (Peromyscus maniculatus) were captured the year following epizootics. The appearance of antibodies to Y. pestis in grasshopper mice coincided with periods of high prairie dog mortality; subsequently, antibody prevalence rates declined, with no seropositive individuals captured 2 yr after epizootics. We did not detect plague in any rodents off of colonies, or on colonies prior to epizootics, and found no evidence of persistent Y. pestis infection in blood cultures. Our results suggest that grasshopper mice could be involved in epizootic spread of Y. pestis, and possibly, serve as a short-term reservoir for plague, but provide no evidence that the grasshopper mouse or any small rodent acts as a long-term, enzootic host for Y. pestis in prairie dog colonies.