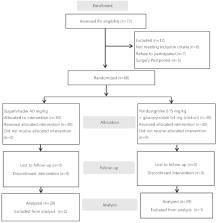 Introduction: Sugammadex has been shown to be associated with prolongation of prothrombin time and activated partial thromboplastin time. However, it is not known whether it could be associated with enhancing postoperative hypocoagulation. The objective of this study was to analyze the effect of 4 mg/kg of sugammadex on thromboelastography (TEG) parameters in surgical patients.

Results: Coagulation time was significantly prolonged in sugammadex group after 10 min of the study drug administration compared to control group (mean value 1.3 ± 0.4 vs. 1.5 ± 0.4, P = 0.03). However, R, alpha angle and MA value were not different between two groups.

Conclusions: Sugammadex 4 mg/kg showed an increase in coagulation time in surgical patients. Physician should aware the potential enhancement of hypocoagulation by sugammadex in the setting of high risk of postoperative bleeding.

The distribution and function of phosphatidylserine in cellular membranes.

P Leventis,  Sergio Grinstein (2009)
Phosphatidylserine (PS) is the most abundant negatively charged phospholipid in eukaryotic membranes. PS directs the binding of proteins that bear C2 or gamma-carboxyglutamic domains and contributes to the electrostatic association of polycationic ligands with cellular membranes. Rather than being evenly distributed, PS is found preferentially in the inner leaflet of the plasma membrane and in endocytic membranes. The loss of PS asymmetry is an early indicator of apoptosis and serves as a signal to initiate blood clotting. This review discusses the determinants and functional implications of the subcellular distribution and membrane topology of PS.

Use of Thromboelastography (TEG) for Detection of New Oral Anticoagulants.

João Dias,  Katherine Norem,  Derek Doorneweerd … (2015)
The clinical introduction of new oral anticoagulants (NOACs) has stimulated the development of tests to quantify the effects of these drugs and manage complications associated with their use. Until recently, the only treatment choices for the prevention of venous thromboembolism in orthopedic surgical patients, as well as for stroke and systemic embolism in patients with atrial fibrillation, were vitamin K antagonists, antiplatelet drugs, and unfractionated and low-molecular-weight heparins. With the approval of NOACs, treatment options and consequent diagnostic challenges have expanded.