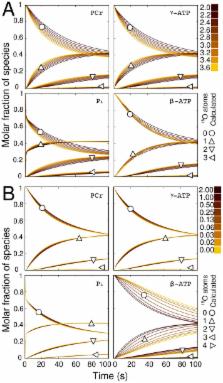 To characterize intracellular energy transfer in the heart, two organ-level methods have frequently been employed:

inversion and saturation transfer, and dynamic

labeling. Creatine kinase (CK) fluxes obtained by following oxygen labeling have been considerably smaller than the fluxes determined by

saturation transfer. It has been proposed that dynamic

saturation transfer measures total unidirectional flux. However, to our knowledge, no sensitivity analysis of flux determination by oxygen labeling has been performed, limiting our ability to compare flux distributions predicted by different methods. Here we analyze oxygen labeling in a physiological heart phosphotransfer network with active CK and adenylate kinase (AdK) shuttles and establish which fluxes determine the labeling state. A mathematical model consisting of a system of ordinary differential equations was composed describing

enrichment in each phosphoryl group and inorganic phosphate. By varying flux distributions in the model and calculating the labeling, we analyzed labeling sensitivity to different fluxes in the heart. We observed that the labeling state is predominantly sensitive to total unidirectional CK and AdK fluxes and not to net fluxes. We conclude that measuring dynamic incorporation of

into the high-energy phosphotransfer network in heart does not permit unambiguous determination of energetic fluxes with a higher magnitude than the ATP synthase rate when the bidirectionality of fluxes is taken into account. Our analysis suggests that the flux distributions obtained using dynamic

labeling, after removing the net flux assumption, are comparable with those from

In heart, the movement of energy metabolites between force-producing myosin, other ATPases, and mitochondria is vital for its function and closely related to heart pathologies. In addition to diffusion, transport of ATP, ADP, Pi, and phosphocreatine occurs along parallel pathways such as the adenylate kinase and creatine kinase shuttles. Two organ-level methods have been developed to study the relative flux through these pathways. However, their results differ. It was recently demonstrated that

studies often suffer from the exclusion of compartmentation from their metabolic models. One study overcame this limitation by using compartmental models and statistical methods on multiple experiments. Here, we analyzed the sensitivity of the other method - dynamic

labeling of phosphoryl groups and inorganic phosphate. For that, we composed a mathematical model tracking enrichment of the metabolites and evaluated sensitivity of labeling to different flux distribution scenarios. Our study shows that the dynamic

method provides a measure of total flux, and not net flux as presumed previously, making the fluxes predicted from both methods consistent. Importantly, conclusions derived on the basis of

labeling analysis, particularly those regarding the net flux through the shuttles in control and pathological cases, need to be reevaluated.

E Boehm,  A Kaasik,  Cedric R Clapier … (2001)
Cells with high and fluctuating energy demands such as cardiomyocytes need efficient systems to link energy production to energy utilization. This is achieved in part by compartmentalized energy transfer enzymes such as creatine kinase (CK). However, hearts from CK-deficient mice develop normal cardiac function under conditions of moderate workload. We have therefore investigated whether a direct functional interplay exists between mitochondria and sarcoplasmic reticulum or between mitochondria and myofilaments in cardiac cells that catalyzes direct energy and signal channeling between organelles. We used the selective permeabilization of sarcolemmal membranes with saponin to study the functional interactions between organelles within the cellular architecture. We measured contractile kinetics, oxygen consumption, and caffeine-induced tension transients. The results show that in hearts of normal mice, ATP produced by mitochondria (supplied with substrates, oxygen, and adenine nucleotides) was able to sustain calcium uptake and contractile speed. Moreover, direct mitochondrially supplied ATP was nearly as effective as CK-supplied ATP and much more effective than externally supplied ATP, suggesting that a direct ATP/ADP channeling exists between the sites of energy production (mitochondria) and energy utilization (sarcoplasmic reticulum and myofilaments). On the other hand, in cardiac cells of mice deficient in mitochondrial and cytosolic CK, marked cytoarchitectural modifications were observed, and direct adenine nucleotide channeling between mitochondria and organelles was still effective for sarcoplasmic reticulum and myofilaments. Such direct crosstalk between organelles may explain the preserved cardiac function of CK-deficient mice under moderate workloads.

W Wiechert,  Alexander P. N. A. de Porto (1997)
The extension of metabolite balancing with carbon labeling experiments, as described by Marx et al. (Biotechnol. Bioeng. 49: 11-29), results in a much more detailed stationary metabolic flux analysis. As opposed to basic metabolite flux balancing alone, this method enables both flux directions of bidirectional reaction steps to be quantitated. However, the mathematical treatment of carbon labeling systems is much more complicated, because it requires the solution of numerous balance equations that are bilinear with respect to fluxes and fractional labeling. In this study, a universal modeling framework is presented for describing the metabolite and carbon atom flux in a metabolic network. Bidirectional reaction steps are extensively treated and their impact on the system's labeling state is investigated. Various kinds of modeling assumptions, as usually made for metabolic fluxes, are expressed by linear constraint equations. A numerical algorithm for the solution of the resulting linear constrained set of nonlinear equations is developed. The numerical stability problems caused by large bidirectional fluxes are solved by a specially developed transformation method. Finally, the simulation of carbon labeling experiments is facilitated by a flexible software tool for network synthesis. An illustrative simulation study on flux identifiability from available flux and labeling measurements in the cyclic pentose phosphate pathway of a recombinant strain of Zymomonas mobilis concludes this contribution.

This work was supported by the Wellcome Trust (Fellowship No. WT081755), Estonian Science Foundation (grant no 7344, PhD stipend for A.I), and European Union through the European Regional Development Fund. The funders had no role in study design, data collection and analysis, decision to publish, or preparation of the manuscript.