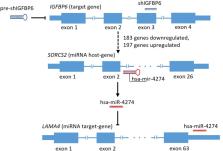 Specificity of RNAi to selected target is challenged by off-target effects, both canonical and non-canonical. Notably, more than half of all human microRNAs are co-expressed with hosting them proteincoding genes. Here we dissect regulatory subnetwork centered on IGFBP6 gene, which is associated with low proliferative state and high migratory activity of basal-like breast cancer. We inhibited expression of IGFBP6 gene in a model cell line for basal-like breast carcinoma MDA-MB-231, then traced secondary and tertiary effects of this knockdown to LAMA4, a laminin encoding gene that contributes to the phenotype of triple-negative breast cancer. LAMA4-regulating miRNA miR-4274 and its host gene SORCS2 were highlighted as intermediate regulators of the expression levels of LAMA4, which correlated in a basal-like breast carcinoma sample subset of TCGA to the levels of SORCS2 negatively. Overall, our study points that the secondary and tertiary layers of regulatory interactions are certainly underappreciated. As these types of molecular event may significantly contribute to the formation of the cell phenotypes after RNA interference based knockdowns, further studies of multilayered molecular networks affected by RNAi are warranted.

3' UTR seed matches, but not overall identity, are associated with RNAi off-targets.

Grayson W. Marshall,  D Ilsley,  Kathryn Robinson … (2006)
Off-target gene silencing can present a notable challenge in the interpretation of data from large-scale RNA interference (RNAi) screens. We performed a detailed analysis of off-targeted genes identified by expression profiling of human cells transfected with small interfering RNA (siRNA). Contrary to common assumption, analysis of the subsequent off-target gene database showed that overall identity makes little or no contribution to determining whether the expression of a particular gene will be affected by a given siRNA, except for near-perfect matches. Instead, off-targeting is associated with the presence of one or more perfect 3' untranslated region (UTR) matches with the hexamer or heptamer seed region (positions 2-7 or 2-8) of the antisense strand of the siRNA. These findings have strong implications for future siRNA design and the application of RNAi in high-throughput screening and therapeutic development.

A potential role for intragenic miRNAs on their hosts' interactome

Ludwig Christian G Hinske,  Pedro AF Galante,  Winston Kuo … (2010)
Background miRNAs are small, non-coding RNA molecules that mainly act as negative regulators of target gene messages. Due to their regulatory functions, they have lately been implicated in several diseases, including malignancies. Roughly half of known miRNA genes are located within previously annotated protein-coding regions ("intragenic miRNAs"). Although a role of intragenic miRNAs as negative feedback regulators has been speculated, to the best of our knowledge there have been no conclusive large-scale studies investigating the relationship between intragenic miRNAs and host genes and their pathways. Results miRNA-containing host genes were three times longer, contained more introns and had longer 5' introns compared to a randomly sampled gene cohort. These results are consistent with the observation that more than 60% of intronic miRNAs are found within the first five 5' introns. Host gene 3'-untranslated regions (3'-UTRs) were 40% longer and contained significantly more adenylate/uridylate-rich elements (AREs) compared to a randomly sampled gene cohort. Coincidentally, recent literature suggests that several components of the miRNA biogenesis pathway are required for the rapid decay of mRNAs containing AREs. A high-confidence set of predicted mRNA targets of intragenic miRNAs also shared many of these features with the host genes. Approximately 20% of intragenic miRNAs were predicted to target their host mRNA transcript. Further, KEGG pathway analysis demonstrated that 22 of the 74 pathways in which host genes were associated showed significant overrepresentation of proteins encoded by the mRNA targets of associated intragenic miRNAs. Conclusions Our findings suggest that both host genes and intragenic miRNA targets may potentially be subject to multiple layers of regulation. Tight regulatory control of these genes is likely critical for cellular homeostasis and absence of disease. To this end, we examined the potential for negative feedback loops between intragenic miRNAs, host genes, and miRNA target genes. We describe, how higher-order miRNA feedback on hosts' interactomes may at least in part explain correlation patterns observed between expression of host genes and intragenic miRNA targets in healthy and tumor tissue.

Experimental validation of the importance of seed complement frequency to siRNA specificity.

Devin Leake,  Judy Anderson,  Elena Maksimova … (2008)
Pairing between the hexamer seed region of a small interfering RNA (siRNA) guide strand (nucleotides 2-7) and complementary sequences in the 3' UTR of mature transcripts has been implicated as an important element in off-target gene regulation and false positive phenotypes. To better understand the association between seed sequences and off-target profiles we performed an analysis of all possible (4096) hexamers and identified a nonuniform distribution of hexamer frequencies across the 3' UTR transcriptome. Subsequent microarray analysis of cells transfected with siRNAs having seeds with low, medium, or high seed complement frequencies (SCFs) revealed that duplexes with low SCFs generally induced fewer off-targets and off-target phenotypes than molecules with more abundant 3' UTR complements. These findings provide the first experimentally validated strategy for designing siRNAs with enhanced specificity and allow for more accurate interpretation of high throughput screening data generated with existing siRNA/shRNA collections.

This article was submitted to Molecular Diagnostics and Therapeutics, a section of the journal Frontiers in Molecular Biosciences