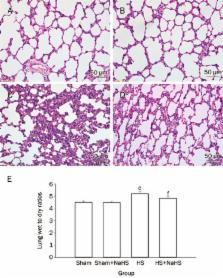 To investigate the protective effects of hydrogen sulfide (H 2S) against inflammation, oxidative stress and apoptosis in a rat model of resuscitated hemorrhagic shock.

Hemorrhagic shock was induced in adult male SD rats by drawing blood from the femoral artery for 10 min. The mean arterial pressure was maintained at 35–40 mmHg for 1.5 h. After resuscitation the animals were observed for 200 min, and then killed. The lungs were harvested and bronchoalveolar lavage fluid was prepared. The levels of relevant proteins were examined using Western blotting and immunohistochemical analyses. NaHS (28 μmol/kg, ip) was injected before the resuscitation.

Caspases: the executioners of apoptosis.

Gerald Cohen (1997)
Apoptosis is a major form of cell death, characterized initially by a series of stereotypic morphological changes. In the nematode Caenorhabditis elegans, the gene ced-3 encodes a protein required for developmental cell death. Since the recognition that CED-3 has sequence identity with the mammalian cysteine protease interleukin-1 beta-converting enzyme (ICE), a family of at least 10 related cysteine proteases has been identified. These proteins are characterized by almost absolute specificity for aspartic acid in the P1 position. All the caspases (ICE-like proteases) contain a conserved QACXG (where X is R, Q or G) pentapeptide active-site motif. Capases are synthesized as inactive proenzymes comprising an N-terminal peptide (prodomain) together with one large and one small subunit. The crystal structures of both caspase-1 and caspase-3 show that the active enzyme is a heterotetramer, containing two small and two large subunits. Activation of caspases during apoptosis results in the cleavage of critical cellular substrates, including poly(ADP-ribose) polymerase and lamins, so precipitating the dramatic morphological changes of apoptosis. Apoptosis induced by CD95 (Fas/APO-1) and tumour necrosis factor activates caspase-8 (MACH/FLICE/Mch5), which contains an N-terminus with FADD (Fas-associating protein with death domain)-like death effector domains, so providing a direct link between cell death receptors and the caspases. The importance of caspase prodomains in the regulation of apoptosis is further highlighted by the recognition of adapter molecules, such as RAIDD [receptor-interacting protein (RIP)-associated ICH-1/CED-3-homologous protein with a death domain]/CRADD (caspase and RIP adapter with death domain), which binds to the prodomain of caspase-2 and recruits it to the signalling complex. Cells undergoing apoptosis following triggering of death receptors execute the death programme by activating a hierarchy of caspases, with caspase-8 and possibly caspase-10 being at or near the apex of this apoptotic cascade.

Two's company, three's a crowd: can H2S be the third endogenous gaseous transmitter?

Rui Wang (2002)
Bearing the public image of a deadly "gas of rotten eggs," hydrogen sulfide (H2S) can be generated in many types of mammalian cells. Functionally, H2S has been implicated in the induction of hippocampal long-term potentiation, brain development, and blood pressure regulation. By acting specifically on KATP channels, H2S can hyperpolarize cell membranes, relax smooth muscle cells, or decrease neuronal excitability. The endogenous metabolism and physiological functions of H2S position this gas well in the novel family of endogenous gaseous transmitters, termed "gasotransmitters." It is hypothesized that H2S is the third endogenous signaling gasotransmitter, besides nitric oxide and carbon monoxide. This positioning of H2S will open an exciting field-H2S physiology-encompassing realization of the interaction of H2S and other gasotransmitters, sulfurating modification of proteins, and the functional role of H2S in multiple systems. It may shed light on the pathogenesis of many diseases related to the abnormal metabolism of H2S.

These authors contributed equally to this article.