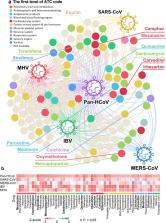 Human coronaviruses (HCoVs), including severe acute respiratory syndrome coronavirus (SARS-CoV) and 2019 novel coronavirus (2019-nCoV, also known as SARS-CoV-2), lead global epidemics with high morbidity and mortality. However, there are currently no effective drugs targeting 2019-nCoV/SARS-CoV-2. Drug repurposing, representing as an effective drug discovery strategy from existing drugs, could shorten the time and reduce the cost compared to de novo drug discovery. In this study, we present an integrative, antiviral drug repurposing methodology implementing a systems pharmacology-based network medicine platform, quantifying the interplay between the HCoV–host interactome and drug targets in the human protein–protein interaction network. Phylogenetic analyses of 15 HCoV whole genomes reveal that 2019-nCoV/SARS-CoV-2 shares the highest nucleotide sequence identity with SARS-CoV (79.7%). Specifically, the envelope and nucleocapsid proteins of 2019-nCoV/SARS-CoV-2 are two evolutionarily conserved regions, having the sequence identities of 96% and 89.6%, respectively, compared to SARS-CoV. Using network proximity analyses of drug targets and HCoV–host interactions in the human interactome, we prioritize 16 potential anti-HCoV repurposable drugs (e.g., melatonin, mercaptopurine, and sirolimus) that are further validated by enrichment analyses of drug-gene signatures and HCoV-induced transcriptomics data in human cell lines. We further identify three potential drug combinations (e.g., sirolimus plus dactinomycin, mercaptopurine plus melatonin, and toremifene plus emodin) captured by the “ Complementary Exposure” pattern: the targets of the drugs both hit the HCoV–host subnetwork, but target separate neighborhoods in the human interactome network. In summary, this study offers powerful network-based methodologies for rapid identification of candidate repurposable drugs and potential drug combinations targeting 2019-nCoV/SARS-CoV-2.

On the free radical scavenging activities of melatonin's metabolites, AFMK and AMK.

Russel Reiter,  Annia Galano,  Kei-Xian Tan (2013)
The reactions of N(1) -acetyl-N(2) -formyl-5-methoxykynuramine (AFMK) and N(1) -acetyl-5-methoxykynuramine (AMK) with (•) OH, (•) OOH, and •OOCCl3 radicals have been studied using the density functional theory. Three mechanisms of reaction have been considered: radical adduct formation (RAF), hydrogen transfer (HT), and single electron transfer (SET). Their relative importance for the free radical scavenging activity of AFMK and AMK has been assessed. It was found that AFMK and AMK react with •OH at diffusion-limited rates, regardless of the polarity of the environment, which supports their excellent •OH radical scavenging activity. Both compounds were found to be also very efficient for scavenging •OOCCl3 , but rather ineffective for scavenging •OOH. Regarding their relative activity, it was found that AFMK systematically is a poorer scavenger than AMK and melatonin. In aqueous solution, AMK was found to react faster than melatonin with all the studied free radicals, while in nonpolar environments, the relative efficiency of AMK and melatonin as free radical scavengers depends on the radical with which they are reacting. Under such conditions, melatonin is predicted to be a better •OOH and •OOCCl3 scavenger than AMK, while AMK is predicted to be slightly better than melatonin for scavenging •OH. Accordingly it seems that melatonin and its metabolite AMK constitute an efficient team of scavengers able of deactivating a wide variety of reactive oxygen species, under different conditions. Thus, the presented results support the continuous protection exerted by melatonin, through the free radical scavenging cascade. © 2012 John Wiley & Sons A/S.