The effect of sodium hyaluronate–chondroitin sulfate combined solution on cartilage formation in osteochondral defects of the rabbit knee: an experimental study 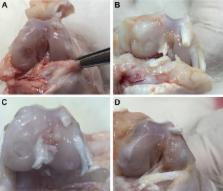 A total of 32 New Zealand White mature rabbits, whose weights ranged from 2.5 to 3 kg, were randomly divided into four groups. Full-thickness osteochondral defect was formed in the left-knee medial femur condyles of all rabbits. Subchondral drilling was then performed. The following treatment protocol was administered intra-articularly on knee joints on days 7, 14, and 21 after surgery: group 1, 0.3 mL combined solution of HA+CS (20 mg CS combined with 16 mg HA/mL); group 2, 0.3 mL HA (16 mg/mL); group 3, 0.3 mL CS (20 mg/mL); and group 4 (control group), 0.3 mL saline solution. In the sixth week, all animals were killed and then evaluated histopathologically and biochemically.

Prevalence of chondral defects in athletes' knees: a systematic review.

David C Flanigan,  P. Harris,  V H Brophy … (2010)
To determine the prevalence of full-thickness focal chondral defects in the athlete's knee. We conducted a systematic review of multiple databases, evaluating studies of the prevalence of articular cartilage defects in athletes. Because of the heterogeneity of data, a meta-analysis could not be performed. Eleven studies were identified for inclusion (931 subjects). All studies were level 4 evidence. Defects were diagnosed via magnetic resonance imaging, arthroscopy, or both. Forty percent of athletes were professionals (NBA and NFL). The overall prevalence of full-thickness focal chondral defects in athletes was 36% (range = 2.4%-75% between all studies). Fourteen percent of athletes were asymptomatic at the time of diagnosis. Patellofemoral defects (37%) were more common than femoral condyle (35%) and tibial plateau defects (25%). Medial condyle defects were more common than lateral (68% vs 32%), and patella defects were more common than trochlea (64% vs 36%). Meniscal tear (47%) was the most common concomitant knee pathological finding, followed by anterior cruciate ligament tear (30%) and then medial collateral ligament or lateral collateral ligament tear (14%). Full-thickness focal chondral defects in the knee are more common in athletes than among the general population. More than one-half of asymptomatic athletes have a full-thickness defect. Further study is needed to define more precisely the prevalence of these lesions in this population.

The microfracture technique in the treatment of full-thickness chondral lesions of the knee in National Football League players.

Repair of articular cartilage defects treated by microfracture and a three-dimensional collagen matrix.

S Nehrer,  U Bindreiter,  U Windberger … (2005)
The objective of our study was to evaluate the behavior of ovine chondrocytes and bone marrow stromal cells (BMSC) on a matrix comprising type-I, -II, and -III collagen in vitro, and the healing of chondral defects in an ovine model treated with the matrix, either unseeded or seeded with autologous chondrocytes, combined with microfracture treatment. For in vitro investigation, ovine chondrocytes and BMSC were seeded on the matrix and cultured at different time points. Histological analysis, immunohistochemistry, biochemical assays for glycosaminoglycans, and real-time quantitative PCR for collagens were performed. The animal study described here included 22 chondral defects in 11 sheep, divided into four treatment groups. Group A: microfracture and collagen matrix seeded with chondrocytes; B: microfracture and unseeded matrices; C: microfracture; D: untreated defects. All animals were sacrificed 16 weeks after implantation, and a histomorphometrical and qualitative evaluation of the defects was performed. The in vitro investigation revealed viable cells up to 3 weeks; chondrocytes had a predominantly round morphology, produced glycosaminoglycans, and expressed both collagen markers, whereas BMSC stained positive for antibodies against type-II collagen; however, no mRNA for type-II collagen was amplified. All treatment groups of the animal model showed better defect filling compared to untreated knees. The cell-seeded group had the greatest quantity of repair tissue and the largest quantity of hyaline-like tissue. Although the collagen matrix is an adequate environment for BMSC in vitro, the additionally implanted unseeded collagen matrix did not increase the repair response after microfracture in chondral defects. Only the matrices seeded with autologous cells in combination with microfracture were able to facilitate the regeneration of hyaline-like cartilage.