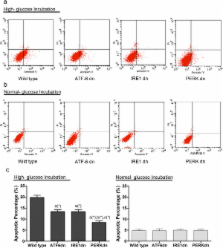 Endoplasmic reticulum (ER) stress is considered one of the mechanisms contributing to reactive oxygen species (ROS)- mediated cell apoptosis. In diabetic cardiomyopathy (DCM), cell apoptosis is generally accepted as the etiological factor and closely related to cardiac ROS generation. ER stress is proposed the link between ROS and cell apoptosis; however, the signaling pathways and their roles in participating ER stress- induced apoptosis in DCM are still unclear.

we demonstrated that the ER stress sensors, referred as PERK, IRE1 and ATF6, were activated in ROS- mediated ER stress- induced cell apoptosis in rat model of DCM which was characterized by cardiac pump and electrical dysfunctions. The deletion of PERK in myocytes exhibited stronger protective effect against apoptosis induced by high- glucose incubation than deletion of ATF6 or IRE in the same myocytes. By subcellular fractionation, rather than ATF6 and IRE1, in primary cardiomyocytes, PERK was found a component of MAMs (mitochondria-associated endoplasmic reticulum membranes) which was the functional and physical contact site between ER and mitochondria.

CHOP is implicated in programmed cell death in response to impaired function of the endoplasmic reticulum.

H Zinszner,  M Kuroda,  X. Wang … (1998)
Cellular stress, particularly in response to toxic and metabolic insults that perturb function of the endoplasmic reticulum (ER stress), is a powerful inducer of the transcription factor CHOP. The role of CHOP in the response of cells to injury associated with ER stress was examined in a murine deficiency model obtained by homologous recombination at the chop gene. Compared with the wild type, mouse embryonic fibroblasts (MEFs) derived from chop -/- animals exhibited significantly less programmed cell death when challenged with agents that perturb ER function. A similar deficit in programmed cells death in response to ER stress was also observed in MEFs that lack CHOP's major dimerization partner, C/EBPbeta, implicating the CHOP-C/EBP pathway in programmed cell death. An animal model for studying the effects of chop on the response to ER stress was developed. It entailed exposing mice with defined chop genotypes to a single sublethal intraperitoneal injection of tunicamycin and resulted in a severe illness characterized by transient renal insufficiency. In chop +/+ and chop +/- mice this was associated with the early expression of CHOP in the proximal tubules followed by the development of a histological picture similar to the human condition known as acute tubular necrosis, a process that resolved by cellular regeneration. In the chop -/- animals, in spite of the severe impairment in renal function, evidence of cellular death in the kidney was reduced compared with the wild type. The proximal tubule epithelium of chop -/- animals exhibited fourfold lower levels of TUNEL-positive cells (a marker for programmed cell death), and significantly less evidence for subsequent regeneration. CHOP therefore has a role in the induction of cell death under conditions associated with malfunction of the ER and may also have a role in cellular regeneration under such circumstances.

Jin Ye,  Robert Rawson,  Ryutaro Komuro … (2000)
ATF6 is a membrane-bound transcription factor that activates genes in the endoplasmic reticulum (ER) stress response. When unfolded proteins accumulate in the ER, ATF6 is cleaved to release its cytoplasmic domain, which enters the nucleus. Here, we show that ATF6 is processed by Site-1 protease (S1P) and Site-2 protease (S2P), the enzymes that process SREBPs in response to cholesterol deprivation. ATF6 processing was blocked completely in cells lacking S2P and partially in cells lacking S1P. ATF6 processing required the RxxL and asparagine/proline motifs, known requirements for S1P and S2P processing, respectively. Cells lacking S2P failed to induce GRP78, an ATF6 target, in response to ER stress. ATF6 processing did not require SCAP, which is essential for SREBP processing. We conclude that S1P and S2P are required for the ER stress response as well as for lipid synthesis.

The endoplasmic reticulum and the unfolded protein response.

Jyoti Malhotra,  Randal Kaufman (2007)
The endoplasmic reticulum (ER) is the site where proteins enter the secretory pathway. Proteins are translocated into the ER lumen in an unfolded state and require protein chaperones and catalysts of protein folding to attain their final appropriate conformation. A sensitive surveillance mechanism exists to prevent misfolded proteins from transiting the secretory pathway and ensures that persistently misfolded proteins are directed towards a degradative pathway. In addition, those processes that prevent accumulation of unfolded proteins in the ER lumen are highly regulated by an intracellular signaling pathway known as the unfolded protein response (UPR). The UPR provides a mechanism by which cells can rapidly adapt to alterations in client protein-folding load in the ER lumen by expanding the capacity for protein folding. In addition, a variety of insults that disrupt protein folding in the ER lumen also activate the UPR. These include changes in intralumenal calcium, altered glycosylation, nutrient deprivation, pathogen infection, expression of folding-defective proteins, and changes in redox status. Persistent protein misfolding initiates apoptotic cascades that are now known to play fundamental roles in the pathogenesis of multiple human diseases including diabetes, atherosclerosis and neurodegenerative diseases.