Downregulated level of insulin in COPD patients during AE; role beyond glucose control? 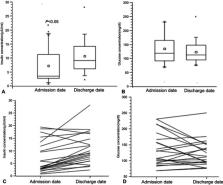 The purpose of this study was to explore the insulin level in the serum of chronic obstructive pulmonary disease (COPD) patients during acute exacerbation (AE).

A high insulin level and a high HOMA-IR status in COPD patients were demonstrated. Downregulated levels of insulin during AE compared with the convalescent state were detected, while the variation in the glucose level was not as great as expected, indicating a potentially important role for insulin in AECOPD.

C. A. M. E. Wilson,  R Rosenfeld,  Yoo Oh … (1997)
The insulin-like growth factors (IGFs) are transported by a family of high-affinity binding proteins (IGFBPs) that protect IGFs from degradation, limit their binding to IGF receptors, and modulate IGF actions. The six classical IGFBPs have been believed to have no affinity for insulin. We now demonstrate that IGFBP-7/mac25, a newly identified member of the IGFBP superfamily that binds IGFs specifically with low affinity is a high-affinity insulin binding protein. IGFBP-7 blocks insulin binding to the insulin receptor and thereby inhibiting the earliest steps in insulin action, such as autophosphorylation of the insulin receptor beta subunit and phosphorylation of IRS-1, indicating that IGFBP-7 is a functional insulin-binding protein. The affinity of other IGFBPs for insulin can be enhanced by modifications that disrupt disulfide bonds or remove the conserved COOH terminus. Like IGFBP-7, an NH2-terminal fragment of IGFBP-3 (IGFBP-3((1-87))), also binds insulin with high affinity and blocks insulin action. IGFBPs with enhanced affinity for insulin might contribute to the insulin resistance of pregnancy, type II diabetes mellitus, and other pathological conditions.

A Systematic Review of Diagnostic Biomarkers of COPD Exacerbation

Yu-Wei Roy Chen,  Janice Leung,  Don Sin (2016)
The aims of this systematic review were to determine which blood-based molecules have been evaluated as possible biomarkers to diagnose chronic obstructive pulmonary disease (COPD) exacerbations (AECOPD) and to ascertain the quality of these biomarker publications. Patients of interest were those that have been diagnosed with COPD. MEDLINE, EMBASE, and CINAHL databases were searched systematically through February 2015 for publications relating to AECOPD diagnostic biomarkers. We used a modified guideline for the REporting of tumor MARKer Studies (mREMARK) to assess study quality. Additional components of quality included the reporting of findings in a replication cohort and the use of receiver-operating characteristics area-under-the curve statistics in evaluating performance. 59 studies were included, in which the most studied biomarkers were C-reactive protein (CRP), interleukin-6 (IL-6), and tumor necrosis factor-alpha (TNF-α). CRP showed consistent elevations in AECOPD compared to control subjects, while IL-6 and TNF-α had variable statistical significance and results. mREMARK scores ranged from 6 to 18 (median score of 13). 12 articles reported ROC analyses and only one study employed a replication cohort to confirm biomarker performance. Studies of AECOPD diagnostic biomarkers remain inconsistent in their reporting, with few studies employing ROC analyses and even fewer demonstrating replication in independent cohorts.

Jaime S Brahim,  Andrea Murphy,  W A Harada … (2011)
Insulin-like growth factor-binding protein-3 (IGFBP-3) is a multifunctional protein known for modulating mitogenic and metabolic actions of IGFs as well as exerting a variety of biological actions not involving IGFs. Here, we show that IGFBP-3 blocks specific physiological consequences of asthma in an IGF-independent manner in vitro and in vivo. IGFBP-3 treatment effectively reduced all physiological manifestations of asthma examined in vivo (airway hyper-responsiveness, cellular and pathological changes in bronchoalveolar lavage fluid and lung tissue, and expression of numerous proinflammatory molecules). These unique IGFBP-3 effects were further confirmed in IGFBP-3-transgenic mice, thus strengthening the notion of IGFBP-3 actions within the respiratory system. Using human epithelial cells, we demonstrated the following: 1) IGFBP-3 blocks TNF-α-induced expression of proinflammatory molecules; 2) IGFBP-3 attenuates the TNF-α-induced migratory response of eosinophils; and 3) IGFBP-3 negatively regulates TNF-α-induced expression of the key NF-κB regulatory molecules IκBα and p65-NF-κB at the post-translational level. We identified that IGFBP-3 degrades IκBα and p65-NF-κB proteins through IGFBP-3 receptor (IGFBP-3R)-mediated activation of caspases thereby inhibiting TNF-α-induced activation of NF-κB signaling cascades. This unique IGFBP-3/IGFBP-3R action was further confirmed by demonstrating complete inhibition of IGFBP-3 action in the presence of caspase inhibitors as well as IGFBP-3R siRNAs. Non-IGF-binding IGFBP-3 mutants further proved the IGF-independent action of IGFBP-3. Our findings indicate that IGFBP-3 inhibits airway inflammation and hyper-responsiveness via an IGF-independent mechanism that involves activation of IGFBP-3R signaling and cross-talk with NF-κB signaling. The IGFBP-3/IGFBP-3R system therefore plays a pivotal role in the pathogenesis of asthma and can serve as a newly identified potential therapeutic target for this debilitating disease. © 2011 by The American Society for Biochemistry and Molecular Biology, Inc.