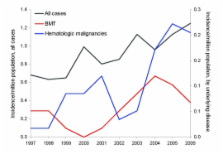 We analyzed hospital records to provide a population-based estimate of zygomycosis incidence and trends over a 10-year period at a national level in France. Data showed an increasing incidence from 0.7/million in 1997 to 1.2/million in 2006 (p<0.001). We compared our data with those from the French Mycosis Study Group, a recently established voluntary network of French mycologists coordinated by the National Reference Center for Mycoses and Antifungals. We documented that incidence of zygomycosis increased, particularly in patients with hematologic malignancies or bone marrow transplants. The role of previous exposure to antifungal drugs lacking activity against zygomycetes could explain this increase but does not appear exclusive. Incidence also increased in the population of patients with diabetes mellitus. We conclude that observed trends reflect a genuine increase of zygomycosis cases in at-risk populations.

Julie Ribes,  Carolyn L. Vanover-Sams,  Doris J. Baker (2000)
The Zygomycetes represent relatively uncommon isolates in the clinical laboratory, reflecting either environmental contaminants or, less commonly, a clinical disease called zygomycosis. There are two orders of Zygomycetes containing organisms that cause human disease, the Mucorales and the Entomophthorales. The majority of human illness is caused by the Mucorales. While disease is most commonly linked to Rhizopus spp., other organisms are also associated with human infection, including Mucor, Rhizomucor, Absidia, Apophysomyces, Saksenaea, Cunninghamella, Cokeromyces, and Syncephalastrum spp. Although Mortierella spp. do cause disease in animals, there is no longer sufficient evidence to suggest that they are true human pathogens. The spores from these molds are transmitted by inhalation, via a variety of percutaneous routes, or by ingestion of spores. Human zygomycosis caused by the Mucorales generally occurs in immunocompromised hosts as opportunistic infections. Host risk factors include diabetes mellitus, neutropenia, sustained immunosuppressive therapy, chronic prednisone use, iron chelation therapy, broad-spectrum antibiotic use, severe malnutrition, and primary breakdown in the integrity of the cutaneous barrier such as trauma, surgical wounds, needle sticks, or burns. Zygomycosis occurs only rarely in immunocompetent hosts. The disease manifestations reflect the mode of transmission, with rhinocerebral and pulmonary diseases being the most common manifestations. Cutaneous, gastrointestinal, and allergic diseases are also seen. The Mucorales are associated with angioinvasive disease, often leading to thrombosis, infarction of involved tissues, and tissue destruction mediated by a number of fungal proteases, lipases, and mycotoxins. If the diagnosis is not made early, dissemination often occurs. Therapy, if it is to be effective, must be started early and requires combinations of antifungal drugs, surgical intervention, and reversal of the underlying risk factors. The Entomophthorales are closely related to the Mucorales on the basis of sexual growth by production of zygospores and by the production of coenocytic hyphae. Despite these similarities, the Entomophthorales and Mucorales have dramatically different gross morphologies, asexual reproductive characteristics, and disease manifestations. In comparison to the floccose aerial mycelium of the Mucorales, the Entomophthorales produce a compact, glabrous mycelium. The asexually produced spores of the Entomophthorales may be passively released or actively expelled into the environment. Human disease with these organisms occurs predominantly in tropical regions, with transmission occurring by implantation of spores via minor trauma such as insect bites or by inhalation of spores into the sinuses. Conidiobolus typically infects mucocutaneous sites to produce sinusitis disease, while Basidiobolus infections occur as subcutaneous mycosis of the trunk and extremities. The Entomophthorales are true pathogens, infecting primarily immunocompetent hosts. They generally do not invade blood vessels and rarely disseminate. Occasional cases of disseminated and angioinvasive disease have recently been described, primarily in immunocompromised patients, suggesting a possible emerging role for this organism as an opportunist.

Brad Spellberg,  John Edwards,  Ashraf Ibrahim (2005)
Mucormycosis is a life-threatening fungal infection that occurs in immunocompromised patients. These infections are becoming increasingly common, yet survival remains very poor. A greater understanding of the pathogenesis of the disease may lead to future therapies. For example, it is now clear that iron metabolism plays a central role in regulating mucormycosis infections and that deferoxamine predisposes patients to mucormycosis by inappropriately supplying the fungus with iron. These findings raise the possibility that iron chelator therapy may be useful to treat the infection as long as the chelator does not inappropriately supply the fungus with iron. Recent data support the concept that high-dose liposomal amphotericin is the preferred monotherapy for mucormycosis. However, several novel therapeutic strategies are available. These options include combination therapy using lipid-based amphotericin with an echinocandin or with an azole (largely itraconazole or posaconazole) or with all three. The underlying principles of therapy for this disease remain rapid diagnosis, reversal of underlying predisposition, and urgent surgical debridement.

Kieren A. Marr,  F Crippa,  Anna Wald … (2002)
Reports have focused on the emergence of moulds as pathogens in recipients of hematopoietic stem cell transplants. To review the incidence of and risks for mould infections, we examined the records of 5589 patients who underwent hematopoietic stem cell transplantation at the Fred Hutchinson Cancer Research Center (Seattle) from 1985 through 1999. After 1992, the incidence of invasive aspergillosis increased in allograft recipients and remained high through the 1990s. Infections with non-fumigatus Aspergillus species, Fusarium species, and Zygomycetes increased during the late 1990s, especially in patients who received multiple transplants. Although infection caused by Scedosporium species was common in patients who had neutropenia, infection caused by Zygomycetes typically occurred later after transplantation, when patients had graft-versus-host disease. The overall 1-year survival rate was equally poor (similar20%) for all patients with mould infections. The results of the present study demonstrate the changing epidemiology of mould infections, emphasizing the increasing importance of amphotericin B--resistant organisms and the differences in risks and outcome of infection with different filamentous fungi.