Infections in patients with diabetes mellitus: A review of pathogenesis 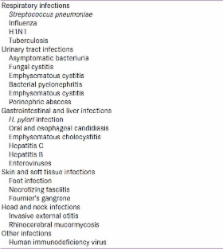 In general, infectious diseases are more frequent and/or serious in patients with diabetes mellitus, which potentially increases their morbimortality. The greater frequency of infections in diabetic patients is caused by the hyperglycemic environment that favors immune dysfunction (e.g., damage to the neutrophil function, depression of the antioxidant system, and humoral immunity), micro- and macro-angiopathies, neuropathy, decrease in the antibacterial activity of urine, gastrointestinal and urinary dysmotility, and greater number of medical interventions in these patients. The infections affect all organs and systems. Some of these problems are seen mostly in diabetic people, such as foot infections, malignant external otitis, rhinocerebral mucormycosis, and gangrenous cholecystitis. In addition to the increased morbidity, infectious processes may be the first manifestation of diabetes mellitus or the precipitating factors for complications inherent to the disease, such as diabetic ketoacidosis and hypoglycemia. Immunization with anti-pneumococcal and influenza vaccines is recommended to reduce hospitalizations, deaths, and medical expenses.

Infections in patients with diabetes mellitus.

Andy Hoepelman,  S. E. Geerlings (1999)
Patients with diabetes mellitus (DM) have infections more often than those without DM. The course of the infections is also more complicated in this patient group. One of the possible causes of this increased prevalence of infections is defects in immunity. Besides some decreased cellular responses in vitro, no disturbances in adaptive immunity in diabetic patients have been described. Different disturbances (low complement factor 4, decreased cytokine response after stimulation) in humoral innate immunity have been described in diabetic patients. However, the clinical relevance of these findings is not clear. Concerning cellular innate immunity most studies show decreased functions (chemotaxis, phagocytosis, killing) of diabetic polymorphonuclear cells and diabetic monocytes/macrophages compared to cells of controls. In general, a better regulation of the DM leads to an improvement of these cellular functions. Furthermore, some microorganisms become more virulent in a high glucose environment. Another mechanism which can lead to the increased prevalence of infections in diabetic patients is an increased adherence of microorganisms to diabetic compared to nondiabetic cells. This has been described for Candida albicans. Possibly the carbohydrate composition of the receptor plays a role in this phenomenon.

James McCarthy,  Anton Peleg,  Timothy Davis … (2007)
Specific defects in innate and adaptive immune function have been identified in diabetic patients in a range of in vitro studies. However, the relevance of these findings to the integrated response to infection in vivo remains unclear, especially in patients with good glycaemic control. Vaccine efficacy seems adequate in most diabetic patients, but those with type 1 diabetes and high glycosylated haemoglobin levels are most likely to exhibit hypo-responsiveness. While particular infections are closely associated with diabetes, this is usually in the context of extreme metabolic disturbances such as ketoacidosis. The link between glycaemic control and the risk of common community-acquired infections is less well established but could be clarified if infection data from large community-based observational or intervention studies were available. The relationship between hospital-acquired infections and diabetes is well recognized, particularly among post-operative cardiac and critically ill surgical patients in whom intensive insulin therapy improves clinical outcome independent of glycaemia. Nevertheless, further research is needed to improve our understanding of the role of diabetes and glycaemic control in the pathogenesis and management of community- and hospital-acquired infections.