Eosinophilic Pneumonia Associated With Natalizumab In A Patient With Multiple Sclerosis: A Case Report And Literature Review 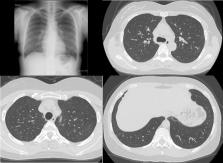 We herein report the case of a 39-year-old Japanese female with eosinophilic pneumonia associated with natalizumab. The patient with bronchial asthma had multiple sclerosis and was treated using natalizumab. The patient was referred to our department because of a persistent cough. A chest computed tomography (CT) scan revealed bilateral patchy consolidation surrounded by ground-glass opacity. A bronchoalveolar lavage (BAL) was performed. Eosinophil levels in the BAL fluid were increased and the patient was consequently diagnosed as eosinophilic pneumonia associated with natalizumab. Therefore, natalizumab treatment was discontinued. Subsequent chest CT findings showed a remarkable improvement without any treatment.

Stephen S Sawcer,  Robin J M Franklin,  Maria Ban (2014)
Genome-wide association studies have revolutionised the genetic analysis of multiple sclerosis. Through international collaborative efforts involving tens of thousands of cases and controls, more than 100 associated common variants have now been identified. These variants consistently implicate genes associated with immunological processes, overwhelmingly lie in regulatory rather than coding regions, and are frequently associated with other autoimmune diseases. The functional implications of these associated variants are mostly unknown; however, early work has shown that several variants have effects on splicing that result in meaningful changes in the balance between different isoforms in relevant tissues. Including the well established risk attributable to variants in genes encoding human leucocyte antigens, only about a quarter of reported heritability can now be accounted for, suggesting that a substantial potential for further discovery remains. Copyright © 2014 Elsevier Ltd. All rights reserved.

Philippe Camus,  Annlyse Fanton,  Philippe Bonniaud … (2015)
An ever-increasing number of drugs can reproduce variegated patterns of naturally occurring interstitial lung disease (ILD), including most forms of interstitial pneumonias, alveolar involvement and, rarely, vasculitis. Drugs in one therapeutic class may collectively produce the same pattern of involvement. A few drugs can produce more than one pattern of ILD. The diagnosis of drug-induced ILD (DI-ILD) essentially rests on the temporal association between exposure to the drug and the development of pulmonary infiltrates. The histopathological features of DI-ILD are generally consistent, rather than suggestive or specific to the drug etiology. Thus, the diagnosis of DI-ILD is mainly made by the meticulous exclusion of all other possible causes. Drug dechallenge produces measurable improvement in symptoms and imaging in the majority of patients, whereas corticosteroid therapy is indicated if symptoms are present or drug dechallenge is without an effect. Rechallenge is justified in a minority of patients, and is discouraged for diagnostic purposes only. Pneumotox (www.pneumotox.com) provides updated information on drug-induced respiratory disease. Copyright 2004 S. Karger AG, Basel

Survival in MS: a randomized cohort study 21 years after the start of the pivotal IFNβ-1b trial.

G. Cutter,  V A Reder,  J Oger … (2012)
To examine the effects of interferon beta (IFNβ)-1b on all-cause mortality over 21 years in the cohort of 372 patients who participated in the pivotal randomized clinical trial (RCT), retaining (in the analysis) the original randomized treatment-assignments. For this randomized long-term cohort study, the primary outcome, defined before data collection, was the comparison of all-cause mortality between the IFNβ-1b 250 μg and placebo groups from the time of randomization through the entire 21-year follow-up interval (intention-to-treat, log-rank test for Kaplan-Meier survival curves). All other survival outcomes were secondary. After a median of 21.1 years from RCT enrollment, 98.4%(366 of 372) of patients were identified, and, of these, 81 deaths were recorded (22.1% [81 of 366]). Patients originally randomly assigned to IFNβ-1b 250 μg showed a significant reduction in all-cause mortality over the 21-year period compared with placebo (p = 0.0173), with a hazard ratio of 0.532 (95% confidence interval 0.314-0.902). The hazard rate of death at long-term follow-up by Kaplan-Meier estimates was reduced by 46.8% among IFNβ-1b 250 μg-treated patients (46.0% among IFNβ-1b 50 μg-treated patients) compared with placebo. Baseline variables did not influence the observed treatment effect. There was a significant survival advantage in this cohort of patients receiving early IFNβ-1b treatment at either dose compared with placebo. Near-complete ascertainment, together with confirmatory findings from both active treatment groups, strengthens the evidence for an IFNβ-1b benefit on all-cause mortality. This study provides Class III evidence that early treatment with IFNβ-1b is associated with prolonged survival in initially treatment-naive patients with relapsing-remitting multiple sclerosis.