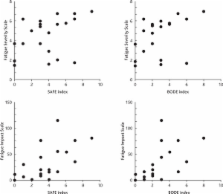 Twenty-two patients with COPD (aged 52-74 years) took part in the study. Multidimensional disease severity was measured using the SAFE and BODE indices. Perceived fatigue was assessed using the Fatigue Severity Scale (FSS) and the Fatigue Impact Scale (FIS). Peripheral muscle endurance was evaluated using the number of sit-ups, squats, and modified push-ups that each patient could do.

H Cabral,  Richard Côté,  Ray M. Marín … (2004)
Chronic obstructive pulmonary disease (COPD) is characterized by an incompletely reversible limitation in airflow. A physiological variable--the forced expiratory volume in one second (FEV1)--is often used to grade the severity of COPD. However, patients with COPD have systemic manifestations that are not reflected by the FEV1. We hypothesized that a multidimensional grading system that assessed the respiratory and systemic expressions of COPD would better categorize and predict outcome in these patients. We first evaluated 207 patients and found that four factors predicted the risk of death in this cohort: the body-mass index (B), the degree of airflow obstruction (O) and dyspnea (D), and exercise capacity (E), measured by the six-minute-walk test. We used these variables to construct the BODE index, a multidimensional 10-point scale in which higher scores indicate a higher risk of death. We then prospectively validated the index in a cohort of 625 patients, with death from any cause and from respiratory causes as the outcome variables. There were 25 deaths among the first 207 patients and 162 deaths (26 percent) in the validation cohort. Sixty-one percent of the deaths in the validation cohort were due to respiratory insufficiency, 14 percent to myocardial infarction, 12 percent to lung cancer, and 13 percent to other causes. Patients with higher BODE scores were at higher risk for death; the hazard ratio for death from any cause per one-point increase in the BODE score was 1.34 (95 percent confidence interval, 1.26 to 1.42; P<0.001), and the hazard ratio for death from respiratory causes was 1.62 (95 percent confidence interval, 1.48 to 1.77; P<0.001). The C statistic for the ability of the BODE index to predict the risk of death was larger than that for the FEV1 (0.74 vs. 0.65). The BODE index, a simple multidimensional grading system, is better than the FEV1 at predicting the risk of death from any cause and from respiratory causes among patients with COPD. Copyright 2004 Massachusetts Medical Society