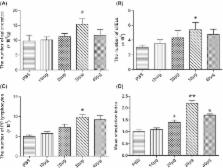 Toxoplasmosis is one of the most widespread zoonoses worldwide. It has a high incidence and can result in severe disease in humans and livestock. Effective vaccines are needed to limit and prevent infection with Toxoplasma gondii. In this study, we evaluated the immuno-protective efficacy of a recombinant Toxoplasma gondii phosphoglycerate mutase 2 (rTgPGAM 2) against T. gondii infection in BALB/c mice. We report that the mice nasally immunised with rTgPGAM 2 displayed significantly higher levels of special IgG antibodies against rTgPGAM 2 (including IgG1, IgG2a and IgAs) and cytokines (including IFN-γ, IL-2 and IL-4) in their blood sera and supernatant of cultured spleen cells compared to those of control animals. In addition, an increased number of spleen lymphocytes and enhanced lymphocyte proliferative responses were observed in the rTgPGAM 2-immunised mice. After chronic infection and lethal challenge with the highly virulent T. gondii RH strain by oral gavage, the survival time of the rTgPGAM 2-immunised mice was longer ( P < 0.01) and the survival rate (70%) was higher compared with the control mice ( P < 0.01). The reduction rate of brain and liver tachyzoites in rTgPGAM 2-vaccinated mice reached approximately 57% and 69% compared with those of the control mice ( P < 0.01). These results suggest that rTgPGAM 2 can generate protective immunity against T. gondii infection in BALB/c mice and may be a promising antigen in the further development of an effective vaccine against T. gondii infection.

Structures of Toxoplasma gondii tachyzoites, bradyzoites, and sporozoites and biology and development of tissue cysts.

J Dubey,  D S Lindsay,  C Speer (1998)
Infections by the protozoan parasite Toxoplasma gondii are widely prevalent world-wide in animals and humans. This paper reviews the life cycle; the structure of tachyzoites, bradyzoites, oocysts, sporocysts, sporozoites and enteroepithelial stages of T. gondii; and the mode of penetration of T. gondii. The review provides a detailed account of the biology of tissue cysts and bradyzoites including in vivo and in vitro development, methods of separation from host tissue, tissue cyst rupture, and relapse. The mechanism of in vivo and in vitro stage conversion from sporozoites to tachyzoites to bradyzoites and from bradyzoites to tachyzoites to bradyzoites is also discussed.

Immune response and immunopathology during toxoplasmosis.

Christopher A. Hunter,  C Dupont,  Alan D Christian (2012)
Toxoplasma gondii is a protozoan parasite of medical and veterinary significance that is able to infect any warm-blooded vertebrate host. In addition to its importance to public health, several inherent features of the biology of T. gondii have made it an important model organism to study host-pathogen interactions. One factor is the genetic tractability of the parasite, which allows studies on the microbial factors that affect virulence and allows the development of tools that facilitate immune studies. Additionally, mice are natural hosts for T. gondii, and the availability of numerous reagents to study the murine immune system makes this an ideal experimental system to understand the functions of cytokines and effector mechanisms involved in immunity to intracellular microorganisms. In this article, we will review current knowledge of the innate and adaptive immune responses required for resistance to toxoplasmosis, the events that lead to the development of immunopathology, and the natural regulatory mechanisms that limit excessive inflammation during this infection.

Lucy J. Boothroyd,  I D Manger,  Ira Blader (2001)
Cells infected with the intracellular protozoan parasite Toxoplasma gondii undergo up-regulation of pro-inflammatory cytokines, organelle redistribution, and protection from apoptosis. To examine the molecular basis of these and other changes, gene expression profiles of human foreskin fibroblasts infected with Toxoplasma were studied using human cDNA microarrays consisting of approximately 22,000 known genes and uncharacterized expressed sequence tags. Early during infection (1-2 h), <1% of all genes show a significant change in the abundance of their transcripts. Of the 63 known genes in this group, 27 encode proteins associated with the immune response. These genes are also up-regulated by secreted, soluble factors from extracellular parasites indicating that the early response does not require parasite invasion. Later during infection, genes involved in numerous host cell processes, including glucose and mevalonate metabolism, are modulated. Many of these late genes are dependent on the direct presence of the parasite; i.e. secreted products from either the parasite or infected cells are insufficient to induce these changes. These results reveal several previously unknown effects on the host cell and lay the foundation for detailed analysis of their role in the host-pathogen interaction.