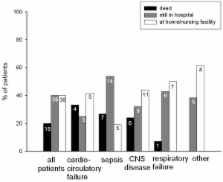 It has been shown that early central venous oxygen saturation (ScvO 2)-guided optimization of hemodynamics can improve outcome in septic patients. The early ScvO 2 profile of other patient groups is unknown. The aim of this study was to characterize unplanned admissions in a multidisciplinary intensive care unit (ICU) with respect to ScvO 2 and outcome.

Ninety-eight consecutive unplanned admissions to a multidisciplinary ICU (median age 63 [range 19 to 83] years, median Simplified Acute Physiology Score [SAPS II] 43 [range 11 to 92]) with a clinical indication for a central venous catheter were included in the study. ScvO 2 was assessed at ICU arrival and six hours later but was not used to guide treatment. Length of stay in ICU (LOS ICU) and in hospital (LOS hospital) and 28-day mortality were recorded.

L Brazzi,  R Latini,  P Pelosi … (1995)
Hemodynamic therapy to raise the cardiac index and oxygen delivery to supranormal may improve outcomes in critically ill patients. We studied whether increasing the cardiac index to a supranormal level (cardiac-index group) or increasing mixed venous oxygen saturation to a normal level (oxygen-saturation group) would decrease morbidity and mortality among critically ill patients, as compared with a control group in which the target was a normal cardiac index. A total of 10,726 patients in 56 intensive care units were screened, among whom 762 patients belonging to predefined diagnostic categories with acute physiology scores of 11 or higher were randomly assigned to the three groups (252 to the control group, 253 to the cardiac-index group, and 257 to the oxygen-saturation group). The hemodynamic targets were reached by 94.3 percent of the control group, 44.9 percent of the cardiac-index group, and 66.7 percent of the oxygen-saturation group (P < 0.001). Mortality was 48.4, 48.6, and 52.1 percent, respectively (P = 0.638), up to the time of discharge from the intensive care unit and 62.3, 61.7, and 63.8 percent (P = 0.875) at six months. Among patients who survived, the number of dysfunctional organs and the length of the stay in the intensive care unit were similar in the three groups. No differences in mortality among the three groups were found for any diagnostic category. A subgroup analysis of the patients in whom hemodynamic targets were reached revealed similar mortality rates: 44.8, 40.4, and 39.0 percent, respectively (P = 0.478). Hemodynamic therapy aimed at achieving supranormal values for the cardiac index or normal values for mixed venous oxygen saturation does not reduce morbidity or mortality among critically ill patients.

D L Bredle,  Christiane Hartog,  Konrad Reinhart … (2004)
To compare the course of continuously measured mixed and central venous O(2) saturations in high-risk patients and to evaluate the impact of various factors that might interfere with reflection spectrophotometry. Prospective, descriptive study in the interdisciplinary ICU of a university hospital. 32 critically ill patients with triple-lumen central vein catheters, including 29 patients requiring pulmonary artery catheterization. The accuracy of fiberoptic measurements was assessed by comparison to reference co-oximeter results at regular intervals. We examined the effect on measurement accuracy of physiological variables including hematocrit, hemoglobin, pH, temperature, and the administration of various solutions via central venous catheter. Continuous parallel measurements of SvO(2) and ScvO(2) were performed in patients with each type of catheters over a total observation time of 1097 h. ScvO(2) values were more accurate and stable than in vitro oximeter measurements ( r=0.96 from 150 samples, mean difference 0.15%, average drift 0.10%/day) and was not significantly affected by synchronous infusion therapy or by changes in hematocrit, hemoglobin, pH, or temperature. ScvO(2) values closely paralleled SvO(2), whether measured in vitro ( r=0.88 from 150 samples) or in vivo ( r=0.81 from 395,128 samples) but averaged about 7+/-4 saturation percentage higher. ScvO(2) changed in parallel in 90% of the 1,498 instances in which SvO(2) changed more than 5% (over an average of 43 min). Continuous fiberoptic measurement of central vein O(2) saturation has potential to be a reliable and convenient tool which could rapidly warn of acute change in the oxygen supply/demand ratio of critically ill patients.

Elliott Crouser (2004)
Sepsis is the leading cause of death in medical intensive care units. In most fatal cases of sepsis the patient experiences an insidious, progressive decline in vital organ function, i.e. multiple organ dysfunction syndrome (MODS), which is commonly associated with signs of accelerated anaerobic metabolism despite supernormal systemic oxygen delivery. Based on this clinical scenario, tissue hypoxia has long been considered the putative mechanism of MODS. However, efforts to enhance tissue oxygenation during severe sepsis have proved ineffective, and a growing body of evidence indicates that mitochondria contribute significantly to the pathogenesis of sepsis-induced MODS. In addition to dysregulation of oxygen metabolism ('cytopathic hypoxia'), sepsis-induced mitochondrial dysfunction contributes to organ injury through accelerated oxidant production and by promoting cell death. Advances in our understanding of the mechanisms of mitochondrial damage and in its detection could revolutionize the management of this devastating disease.