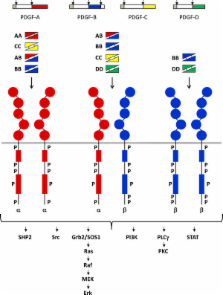 Platelet-derived growth factor (PDGF) isoforms and PDGF receptors have important functions in the regulation of growth and survival of certain cell types during embryonal development and e.g. tissue repair in the adult. Overactivity of PDGF receptor signaling, by overexpression or mutational events, may drive tumor cell growth. In addition, pericytes of the vasculature and fibroblasts and myofibroblasts of the stroma of solid tumors express PDGF receptors, and PDGF stimulation of such cells promotes tumorigenesis. Inhibition of PDGF receptor signaling has proven to useful for the treatment of patients with certain rare tumors. Whether treatment with PDGF/PDGF receptor antagonists will be beneficial for more common malignancies is the subject for ongoing studies.

Epithelial-mesenchymal transitions in development and disease.

Jean Paul Thiery,  Hervé Acloque,  Ruby Huang … (2009)
The epithelial to mesenchymal transition (EMT) plays crucial roles in the formation of the body plan and in the differentiation of multiple tissues and organs. EMT also contributes to tissue repair, but it can adversely cause organ fibrosis and promote carcinoma progression through a variety of mechanisms. EMT endows cells with migratory and invasive properties, induces stem cell properties, prevents apoptosis and senescence, and contributes to immunosuppression. Thus, the mesenchymal state is associated with the capacity of cells to migrate to distant organs and maintain stemness, allowing their subsequent differentiation into multiple cell types during development and the initiation of metastasis.

Armando Santoro,  Luigi Bolondi,  Josep Llovet … (2008)
No effective systemic therapy exists for patients with advanced hepatocellular carcinoma. A preliminary study suggested that sorafenib, an oral multikinase inhibitor of the vascular endothelial growth factor receptor, the platelet-derived growth factor receptor, and Raf may be effective in hepatocellular carcinoma. In this multicenter, phase 3, double-blind, placebo-controlled trial, we randomly assigned 602 patients with advanced hepatocellular carcinoma who had not received previous systemic treatment to receive either sorafenib (at a dose of 400 mg twice daily) or placebo. Primary outcomes were overall survival and the time to symptomatic progression. Secondary outcomes included the time to radiologic progression and safety. At the second planned interim analysis, 321 deaths had occurred, and the study was stopped. Median overall survival was 10.7 months in the sorafenib group and 7.9 months in the placebo group (hazard ratio in the sorafenib group, 0.69; 95% confidence interval, 0.55 to 0.87; P<0.001). There was no significant difference between the two groups in the median time to symptomatic progression (4.1 months vs. 4.9 months, respectively, P=0.77). The median time to radiologic progression was 5.5 months in the sorafenib group and 2.8 months in the placebo group (P<0.001). Seven patients in the sorafenib group (2%) and two patients in the placebo group (1%) had a partial response; no patients had a complete response. Diarrhea, weight loss, hand-foot skin reaction, and hypophosphatemia were more frequent in the sorafenib group. In patients with advanced hepatocellular carcinoma, median survival and the time to radiologic progression were nearly 3 months longer for patients treated with sorafenib than for those given placebo. (ClinicalTrials.gov number, NCT00105443.) 2008 Massachusetts Medical Society