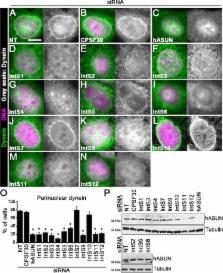 A pool of dynein anchored to the nuclear surface mediates many processes at G2/M, although its spatial and temporal regulation is poorly understood. Asunder, a critical regulator of dynein recruitment to the nuclear envelope, works in the nucleus as part of Integrator, an snRNA-processing complex, to mediate this event.

We previously reported that Asunder (ASUN) is essential for recruitment of dynein motors to the nuclear envelope (NE) and nucleus–centrosome coupling at the onset of cell division in cultured human cells and Drosophila spermatocytes, although the mechanisms underlying this regulation remain unknown. We also identified ASUN as a functional component of Integrator (INT), a multisubunit complex required for 3′-end processing of small nuclear RNAs. We now provide evidence that ASUN acts in the nucleus in concert with other INT components to mediate recruitment of dynein to the NE. Knockdown of other individual INT subunits in HeLa cells recapitulates the loss of perinuclear dynein in ASUN–small interfering RNA cells. Forced localization of ASUN to the cytoplasm via mutation of its nuclear localization sequence blocks its capacity to restore perinuclear dynein in both cultured human cells lacking ASUN and Drosophila asun spermatocytes. In addition, the levels of several INT subunits are reduced at G2/M when dynein is recruited to the NE, suggesting that INT does not directly mediate this step. Taken together, our data support a model in which a nuclear INT complex promotes recruitment of cytoplasmic dynein to the NE, possibly via a mechanism involving RNA processing.

Monica Gotta,  Alexander Kanapin,  Julie Ahringer … (2003)
A principal challenge currently facing biologists is how to connect the complete DNA sequence of an organism to its development and behaviour. Large-scale targeted-deletions have been successful in defining gene functions in the single-celled yeast Saccharomyces cerevisiae, but comparable analyses have yet to be performed in an animal. Here we describe the use of RNA interference to inhibit the function of approximately 86% of the 19,427 predicted genes of C. elegans. We identified mutant phenotypes for 1,722 genes, about two-thirds of which were not previously associated with a phenotype. We find that genes of similar functions are clustered in distinct, multi-megabase regions of individual chromosomes; genes in these regions tend to share transcriptional profiles. Our resulting data set and reusable RNAi library of 16,757 bacterial clones will facilitate systematic analyses of the connections among gene sequence, chromosomal location and gene function in C. elegans.

Daniel Kalderon,  Bruce L Roberts,  William Richardson … (1984)
A short sequence of amino acids including Lys-128 is required for the normal nuclear accumulation of wild-type and deleted forms of SV40 large T antigen. A cytoplasmic large T mutant that lacks sequences from around Lys-128 localizes to the nucleus if the missing sequence is attached to its amino terminus. The implication that the sequence element around Lys-128 acts as an autonomous signal capable of specifying nuclear location was tested directly by transferring it to the amino termini of beta-galactosidase and of pyruvate kinase, normally a cytoplasmic protein. Sequences that included the putative signal induced each of the fusion proteins to accumulate completely in the nucleus but had no discernible effect when Lys-128 was replaced by Thr. By reducing the size of the transposed sequence we conclude that Pro-Lys-Lys-Lys-Arg-Lys-Val can act as a nuclear location signal. The sequence may represent a prototype of similar sequences in other nuclear proteins.

G Rubin,  Allan Spradling (1982)
Exogenous DNA sequences were introduced into the Drosophila germ line. A rosy transposon (ry1), constructed by inserting a chromosomal DNA fragment containing the wild-type rosy gene into a P transposable element, transformed germ line cells in 20 to 50 percent of the injected rosy mutant embryos. Transformants contained one or two copies of chromosomally integrated, intact ry1 that were stably inherited in subsequent generations. These transformed flies had wild-type eye color indicating that the visible genetic defect in the host strain could be fully and permanently corrected by the transferred gene. To demonstrate the generality of this approach, a DNA segment that does not confer a recognizable phenotype on recipients was also transferred into germ line chromosomes.