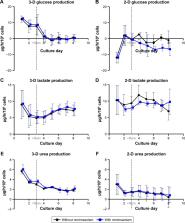 Remimazolam is an ultra-short acting benzodiazepine under development for procedural sedation and general anesthesia. It is hydrolyzed by CES1 to an inactive metabolite (CNS7054).

In this study, the effect of continuous remimazolam exposure on its metabolism and on CES1 expression was investigated in a dynamic 3-D bioreactor culture model inoculated with primary human hepatocytes.

Remimazolam was continuously infused into bioreactors for 5 days at a final concentration of 3,000 ng/ml (6.8 µM). In parallel, 2-D cultures were run with cells from the same donors, but with discontinuous exposure to remimazolam.

The results indicated a stable metabolism of remimazolam during 5 days of continuous exposure to clinically relevant concentrations of the drug. Moreover, there was no evidence for a harmful effect of remimazolam exposure on the integrity and metabolic activity of in vitro cultivated primary human hepatocytes.

Masakiyo Hosokawa (2008)
Mammalian carboxylesterases (CESs) comprise a multigene family whose gene products play important roles in biotransformation of ester- or amide-type prodrugs. They are members of an α , β-hydrolase-fold family and are found in various mammals. It has been suggested that CESs can be classified into five major groups denominated CES1-CES5, according to the homology of the amino acid sequence, and the majority of CESs that have been identified belong to the CES1 or CES2 family. The substrate specificities of CES1 and CES2 are significantly different. The CES1 isozyme mainly hydrolyzes a substrate with a small alcohol group and large acyl group, but its wide active pocket sometimes allows it to act on structurally distinct compounds of either a large or small alcohol moiety. In contrast, the CES2 isozyme recognizes a substrate with a large alcohol group and small acyl group, and its substrate specificity may be restricted by the capability of acyl-enzyme conjugate formation due to the presence of conformational interference in the active pocket. Since pharmacokinetic and pharmacological data for prodrugs obtained from preclinical experiments using various animals are generally used as references for human studies, it is important to clarify the biochemical properties of CES isozymes. Further experimentation for an understanding of detailed substrate specificity of prodrugs for CES isozymes and its hydrolysates will help us to design the ideal prodrugs.

L Schyschka,  J Sánchez,  Z. Wang … (2013)
Primary human hepatocytes (PHH) are the "gold standard" for in vitro toxicity tests. However, 2D PHH cultures have limitations that are due to a time-dependent dedifferentiation process visible by morphological changes closely connected to a decline of albumin production and CYP450 activity. The 3D in vitro culture corresponds to in vivo-like tissue architecture, which preserves functional characteristics of hepatocytes, and therefore can at least partially overcome the restrictions of 2D cultures. Consequently, several drug toxicities observed in vivo cannot be reproduced in 2D in vitro models, for example, the toxic effects of acetaminophen. The objective of this study was to identify molecular differences between 2D and 3D cultivation which explain the observed toxicity response. Our data demonstrated an increase in cell death after treatment with acetaminophen in 3D, but not in 2D cultures. Additionally, an acetaminophen concentration-dependent increase in the CYP2E1 expression level in 3D cultures was detected. However, during the treatment with 10 mM acetaminophen, the expression level of SOD gradually decreased in 3D cultures and was undetectable after 24 h. In line with these findings, we observed higher import/export rates in the membrane transport protein, multidrug resistance-associated protein-1, which is known to be specific for acetaminophen transport. The presented data demonstrate that PHH cultured in 3D preserve certain metabolic functions. Therefore, they have closer resemblance to the in vivo situation than PHH in 2D cultures. In consequence, 3D cultures will allow for a more accurate hepatotoxicity prediction in in vitro models in the future.

Catherine C. Bell,  Anita Dankers,  Volker M Lauschke … (2018)
Abstract Primary human hepatocytes (PHHs) are commonly used for in vitro studies of drug-induced liver injury. However, when cultured as 2D monolayers, PHH lose crucial hepatic functions within hours. This dedifferentiation can be ameliorated when PHHs are cultured in sandwich configuration (2Dsw), particularly when cultures are regularly re-overlaid with extracellular matrix, or as 3D spheroids. In this study, the 6 participating laboratories evaluated the robustness of these 2 model systems made from cryopreserved PHH from the same donors considering both inter-donor and inter-laboratory variability and compared their suitability for use in repeated-dose toxicity studies using 5 different hepatotoxins with different toxicity mechanisms. We found that expression levels of proteins involved in drug absorption, distribution, metabolism, and excretion, as well as catalytic activities of 5 different CYPs, were significantly higher in 3D spheroid cultures, potentially affecting the exposure of the cells to drugs and their metabolites. Furthermore, global proteomic analyses revealed that PHH in 3D spheroid configuration were temporally stable whereas proteomes from the same donors in 2Dsw cultures showed substantial alterations in protein expression patterns over the 14 days in culture. Overall, spheroid cultures were more sensitive to the hepatotoxic compounds investigated, particularly upon long-term exposures, across testing sites with little inter-laboratory or inter-donor variability. The data presented here suggest that repeated-dosing regimens improve the predictivity of in vitro toxicity assays, and that PHH spheroids provide a sensitive and robust system for long-term mechanistic studies of drug-induced hepatotoxicity, whereas the 2Dsw system has a more dedifferentiated phenotype and lower sensitivity to detect hepatotoxicity.