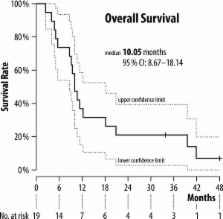 Advanced pancreatic cancer (APC), beside its high mortality, causes the highest rates of venous thromboembolic events (VTE). Enoxaparin, a low molecular weight heparin (LMWH), is effective in prevention and treatment of VTE. Some small studies indicated that this benefit might extend to patients with cancer and probably prolong survival due to independent mechanisms. We initiated this safety investigation to get feasibility information on intensified chemotherapy combined with LMWH in outpatients with APC treated in 1 st line.

The trial was a prospective, open-label, single center investigation in outpatients with inoperable pancreatic cancer who were treated with intensified first-line chemotherapy along with concomitant application of subcutaneous LMWH. The combined chemotherapy consisted of gemcitabine 1 g/m 2 (30 min), 5-FU 750 mg/m 2 (24 h), folinic acid 200 mg/m 2 (30 min), and Cisplatin 30 mg/m 2 (90 min) on day 1 and 8; q3w for the first 12 weeks (GFFC) followed by gemcitabine alone in patients without cancer progression. The simultaneous application of prophylactic enoxaparin started on day 1 of chemotherapy with a fixed dose of 40 mg daily. Statistical analyses were performed using R 3.01 with software package CMPRSK and SPSS software v19.0.

The investigation was stopped after recruitment of 19 patients. At this time 15 patients had completed the required 12 weeks of treatment. Based on 71 cycles of GFFC + enoxaparin (median 4/pt [range: 2–4]) and 108 cycles of single-agent gemcitabine + enoxaparin (median 4/pt [range: 0–18]) the cumulative frequency of NCI-CTC toxicities grade 3/4 was below 10%. One case (5%) of a symptomatic non-lethal thromboembolic event was observed while receiving LMWH treatment. No severe bleeding event as defined in the protocol has been observed. The median overall survival was 10.05 [95% CI: 8.67-18.14] months.

The addition of enoxaparin to GFFC chemotherapy is feasible, safe and does not appear to affect the efficacy or the toxicity profile of the chemotherapy regimen in patients with advanced pancreatic adenocarcinoma. Based on these findings we have initiated the randomized CONKO-004 trial to examine whether enoxaparin reduces the incidence of thromboembolic events or increases overall outcome.

Ahmedin Jemal,  Freddie Bray,  Melissa M Center … (2015)
The global burden of cancer continues to increase largely because of the aging and growth of the world population alongside an increasing adoption of cancer-causing behaviors, particularly smoking, in economically developing countries. Based on the GLOBOCAN 2008 estimates, about 12.7 million cancer cases and 7.6 million cancer deaths are estimated to have occurred in 2008; of these, 56% of the cases and 64% of the deaths occurred in the economically developing world. Breast cancer is the most frequently diagnosed cancer and the leading cause of cancer death among females, accounting for 23% of the total cancer cases and 14% of the cancer deaths. Lung cancer is the leading cancer site in males, comprising 17% of the total new cancer cases and 23% of the total cancer deaths. Breast cancer is now also the leading cause of cancer death among females in economically developing countries, a shift from the previous decade during which the most common cause of cancer death was cervical cancer. Further, the mortality burden for lung cancer among females in developing countries is as high as the burden for cervical cancer, with each accounting for 11% of the total female cancer deaths. Although overall cancer incidence rates in the developing world are half those seen in the developed world in both sexes, the overall cancer mortality rates are generally similar. Cancer survival tends to be poorer in developing countries, most likely because of a combination of a late stage at diagnosis and limited access to timely and standard treatment. A substantial proportion of the worldwide burden of cancer could be prevented through the application of existing cancer control knowledge and by implementing programs for tobacco control, vaccination (for liver and cervical cancers), and early detection and treatment, as well as public health campaigns promoting physical activity and a healthier dietary intake. Clinicians, public health professionals, and policy makers can play an active role in accelerating the application of such interventions globally.

Improvements in survival and clinical benefit with gemcitabine as first-line therapy for patients with advanced pancreas cancer: a randomized trial.

Robert Nelson,  Sarah J Moore,  H Burris … (1997)
Most patients with advanced pancreas cancer experience pain and must limit their daily activities because of tumor-related symptoms. To date, no treatment has had a significant impact on the disease. In early studies with gemcitabine, patients with pancreas cancer experienced an improvement in disease-related symptoms. Based on those findings, a definitive trial was performed to assess the effectiveness of gemcitabine in patients with newly diagnosed advanced pancreas cancer. One hundred twenty-six patients with advanced symptomatic pancreas cancer completed a lead-in period to characterize and stabilize pain and were randomized to receive either gemcitabine 1,000 mg/m2 weekly x 7 followed by 1 week of rest, then weekly x 3 every 4 weeks thereafter (63 patients), or to fluorouracil (5-FU) 600 mg/m2 once weekly (63 patients). The primary efficacy measure was clinical benefit response, which was a composite of measurements of pain (analgesic consumption and pain intensity), Karnofsky performance status, and weight. Clinical benefit required a sustained (> or = 4 weeks) improvement in at least one parameter without worsening in any others. Other measures of efficacy included response rate, time to progressive disease, and survival. Clinical benefit response was experienced by 23.8% of gemcitabine-treated patients compared with 4.8% of 5-FU-treated patients (P = .0022). The median survival durations were 5.65 and 4.41 months for gemcitabine-treated and 5-FU-treated patients, respectively (P = .0025). The survival rate at 12 months was 18% for gemcitabine patients and 2% for 5-FU patients. Treatment was well tolerated. This study demonstrates that gemcitabine is more effective than 5-FU in alleviation of some disease-related symptoms in patients with advanced, symptomatic pancreas cancer. Gemcitabine also confers a modest survival advantage over treatment with 5-FU.