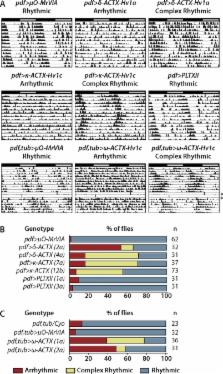 The regulation of the daily fluctuations that characterize an organism's physiology and behavior requires coordination of the cellular oscillations of individual “clock” neurons within the circadian control network. Clock neurons that secrete a neuropeptide called pigment dispersing factor (PDF) calibrate, or entrain, both the phase of organismal rhythms and the cellular oscillations of other clock neurons. In this study, we tested the hypothesis that phase of PDF secretion rhythms entrains phase of non-PDF neurons and locomotor rhythms using the tethered- toxin technique (which affixes toxins to the cell membrane) to express ion channel–specific peptide toxins in PDF neurons. A particular toxin inhibits inactivation of the Drosophila para sodium (Na +) channel. Inhibition of Na + channel inactivation in PDF neurons of transgenic flies induces phase advance of PDF rhythm, and correlated phase advance of lights-on anticipatory locomotor activity, suggesting that phase of morning activity is determined by phase of PDF oscillation. Therefore, voltage-gated Na + channels of Drosophila clock neurons play a key role in determining the phase relationship between circadian transcriptional feedback oscillation and PDF secretion, and PDF-secreting clock neurons entrain the phase of organismal rhythms via the temporal patterning of secreted PDF signals.

N Perrimon,  H. Brand (1993)
We have designed a system for targeted gene expression that allows the selective activation of any cloned gene in a wide variety of tissue- and cell-specific patterns. The gene encoding the yeast transcriptional activator GAL4 is inserted randomly into the Drosophila genome to drive GAL4 expression from one of a diverse array of genomic enhancers. It is then possible to introduce a gene containing GAL4 binding sites within its promoter, to activate it in those cells where GAL4 is expressed, and to observe the effect of this directed misexpression on development. We have used GAL4-directed transcription to expand the domain of embryonic expression of the homeobox protein even-skipped. We show that even-skipped represses wingless and transforms cells that would normally secrete naked cuticle into denticle secreting cells. The GAL4 system can thus be used to study regulatory interactions during embryonic development. In adults, targeted expression can be used to generate dominant phenotypes for use in genetic screens. We have directed expression of an activated form of the Dras2 protein, resulting in dominant eye and wing defects that can be used in screens to identify other members of the Dras2 signal transduction pathway.

Kunihiro Matsumoto,  A. Mark Osborn,  Tessa Davis … (2003)
We have developed a method for temporal and regional gene expression targeting (TARGET) in Drosophila and show the simultaneous spatial and temporal rescue of a memory defect. The transient expression of the rutabaga-encoded adenylyl cyclase in the mushroom bodies of the adult brain was necessary and sufficient to rescue the rutabaga memory deficit, which rules out a developmental brain defect in the etiology of this deficit and demonstrates an acute role for rutabaga in memory formation in these neurons. The TARGET system offers general utility in simultaneously addressing issues of when and where gene products are required.

G Rubin,  Allan Spradling (1982)
Exogenous DNA sequences were introduced into the Drosophila germ line. A rosy transposon (ry1), constructed by inserting a chromosomal DNA fragment containing the wild-type rosy gene into a P transposable element, transformed germ line cells in 20 to 50 percent of the injected rosy mutant embryos. Transformants contained one or two copies of chromosomally integrated, intact ry1 that were stably inherited in subsequent generations. These transformed flies had wild-type eye color indicating that the visible genetic defect in the host strain could be fully and permanently corrected by the transferred gene. To demonstrate the generality of this approach, a DNA segment that does not confer a recognizable phenotype on recipients was also transferred into germ line chromosomes.

* To whom correspondence should be addressed. E-mail: michael.nitabach@ 123456yale.edu