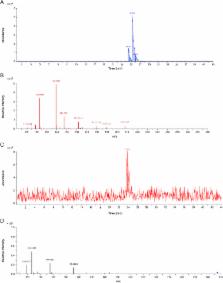 Herbal medicines are highly complex and have unknown mechanisms in diseases treatment. Saraca asoca (Roxb.), De. Wild has been recommended to treat gynecological disorders and used in several commercial polyherbal formulations. In present study, efforts have been made to explore antimicrobial activity and its co-relation with the distributions of catechins in the organs of S. asoca using targeted MS/MS. Eight extracts (cold and hot water) from four different organs of S. asoca and two drugs were prepared and antimicrobial activity was assessed by microbroth dilution assay. Quantitative and qualitative analysis of catechins in crude extracts was done by using targeted and auto-MS/MS and correlated with antimicrobial activity. (+)-Catechin and (+)-epicatechin and their biosynthesis related compound were found to be up-regulated in regenerated bark and leaves extracts. (−)-Epigallocatechin was found to be significantly higher in bark water extract as compared to others but showed low antimicrobial activity. Result showed down-regulation of (−)-epigallocatechin and up-regulation of (+)-catechin and (+)-epicatechin in the regenerated bark and leaves of S. asoca. It might be the contributing factor in the antimicrobial activity of regenerated bark and leaves of the plant. The concentration of (+)-epicatechin in processed drugs (Ashokarishta) from Baidyanath was found to be seven times higher than that of Dabur Pvt. Ltd., but no antimicrobial activity was observed, indicating the variations among the plant based drugs. This will be helpful in rational use of S. asoca parts. Furthermore, the analytical method developed is sensitive, repeatable and reliable; therefore, it is suitable for quality control of herbal drugs.

Chemical Diversity and Defence Metabolism: How Plants Cope with Pathogens and Ozone Pollution

Marcello Iriti,  Franco Faoro (2009)
Chemical defences represent a main trait of the plant innate immune system. Besides regulating the relationship between plants and their ecosystems, phytochemicals are involved both in resistance against pathogens and in tolerance towards abiotic stresses, such as atmospheric pollution. Plant defence metabolites arise from the main secondary metabolic routes, the phenylpropanoid, the isoprenoid and the alkaloid pathways. In plants, antibiotic compounds can be both preformed (phytoanticipins) and inducible (phytoalexins), the former including saponins, cyanogenic glycosides and glucosinolates. Chronic exposure to tropospheric ozone (O3) stimulates the carbon fluxes from the primary to the secondary metabolic pathways to a great extent, inducing a shift of the available resources in favour of the synthesis of secondary products. In some cases, the plant defence responses against pathogens and environmental pollutants may overlap, leading to the unspecific synthesis of similar molecules, such as phenylpropanoids. Exposure to ozone can also modify the pattern of biogenic volatile organic compounds (BVOC), emitted from plant in response to herbivore feeding, thus altering the tritrophic interaction among plant, phytophagy and their natural enemies. Finally, the synthesis of ethylene and polyamines can be regulated by ozone at level of S-adenosylmethionine (SAM), the biosynthetic precursor of both classes of hormones, which can, therefore, mutually inhibit their own biosynthesis with consequence on plant phenotype.

Xiao-Fei Chen,  Hai-Tang Wu,  Guang-guo Tan … (2011)
With the expansion of herbal medicine (HM) market, the issue on how to apply up-to-date analytical tools on qualitative analysis of HMs to assure their quality, safety and efficacy has been arousing great attention. Due to its inherent characteristics of accurate mass measurements and multiple stages analysis, the integrated strategy of liquid chromatography (LC) coupled with time-of-ﬂight mass spectrometry (TOF-MS) and ion trap mass spectrometry (IT-MS) is well-suited to be performed as qualitative analysis tool in this field. The purpose of this review is to provide an overview on the potential of this integrated strategy, including the review of general features of LC-IT-MS and LC-TOF-MS, the advantages of their combination, the common procedures for structure elucidation, the potential of LC-hybrid-IT-TOF/MS and also the summary and discussion of the applications of the integrated strategy for HM qualitative analysis (2006–2011). The advantages and future developments of LC coupled with IT and TOF-MS are highlighted.