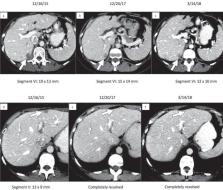 Gastrointestinal stromal tumor (GIST) is a devastating disease, especially in the setting of metastasis. The natural progression of GIST has been significantly altered by the development of small molecule tyrosine kinase inhibitors (TKIs), including imatinib, sunitinib, and regorafenib, all of which are FDA approved. However, TKIs are not always well-tolerated, and the refractory disease continues to be a problem. For these reasons, alternative treatments are needed. In this report, we discuss a patient with metastatic wild-type (WT) GIST refractory to multiple TKIs, but with a durable clinical response to the anti-programmed cell death protein 1 (PD-1) antibody, nivolumab. This report suggests that continued research evaluating checkpoint inhibitors in GIST is warranted.

Michael Heinrich,  Christopher L Corless,  Craig Fletcher (2004)
Once a poorly defined pathologic oddity, in recent years, gastrointestinal stromal tumor (GIST) has emerged as a distinct oncogenetic entity that is now center stage in clinical trials of kinase-targeted therapies. This review charts the rapid progress that has established GIST as a model for understanding the role of oncogenic kinase mutations in human tumorigenesis. Approximately 80% to 85% of GISTs harbor activating mutations of the KIT tyrosine kinase. In a series of 322 GISTs (including 140 previously published cases) studied by the authors in detail, mutations in the KIT gene occurred with decreasing frequency in exons 11 (66.1%), 9 (13%), 13 (1.2%), and 17 (0.6%). In the same series, a subset of tumors had mutations in the KIT-related kinase gene PDGF receptor alpha (PDGFRA), which occurred in either exon 18 (5.6%) or 12 (1.5%). The remainder of GISTs (12%) were wild type for both KIT and PDGFRA. Comparative studies of KIT-mutant, PDGFRA-mutant, and wild-type GISTs indicate that there are many similarities between these groups of tumors but also important differences. In particular, the responsiveness of GISTs to treatment with the kinase inhibitor imatinib varies substantially depending on the exonic location of the KIT or PDGFRA mutation. Given these differences, which have implications both for the diagnosis and treatment of GISTs, we propose a molecular-based classification of GIST. Recent studies of familial GIST, pediatric GIST, and variant forms of GIST related to Carney's triad and neurofibromatosis type 1 are discussed in relationship to this molecular classification. In addition, the role of mutation screening in KIT and PDGFRA as a diagnostic and prognostic aid is emphasized in this review.