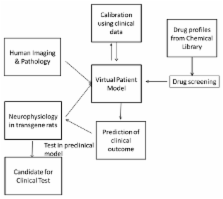 Successful disease modifying drug development for Alzheimer’s disease (AD) has hit a roadblock with the recent failures of amyloid-based therapies, highlighting the translational disconnect between preclinical animal models and clinical outcome. Although disease modifying therapies are the Holy Grail to pursue, symptomatic therapies addressing cognitive and neuropsychiatric aspects of the disease are also extremely important for the quality of life of patients and caregivers. Despite the fact that neuropsychiatric problems in Alzheimer patients are the major driver for costs associated with institutionalization, no good preclinical animal models with predictive validity have been documented. We propose a combination of quantitative systems pharmacology (QSP), phenotypic screening and preclinical animal models as a novel strategy for addressing the bottleneck in both cognitive and neuropsychiatric drug discovery and development for AD. Preclinical animal models such as transgene rats documenting changes in neurotransmitters with tau and amyloid pathology will provide key information that together with human imaging, pathology and clinical data will inform the virtual patient model. In this way QSP modeling can partially overcome the translational disconnect and reduce the attrition of drug programs in the clinical setting. This approach is different from target driven drug discovery as it aims to restore emergent properties of the networks and therefore likely will identify multitarget drugs. We review examples on how this hybrid humanized QSP approach has been helpful in predicting clinical outcomes in schizophrenia treatment and cognitive impairment in AD and expand on how this strategy could be applied to neuropsychiatric symptoms in dementia. We believe such an innovative approach when used carefully could change the Research and Development paradigm for symptomatic treatment in AD.

Georg Juckel,  Florian Schlagenhauf,  Michael Koslowski … (2006)
Negative symptoms may be associated with dysfunction of the brain reward system in schizophrenia. We used functional magnetic resonance imaging (fMRI) to assess the BOLD response in the ventral striatum of unmedicated schizophrenics during presentation of reward-indicating and loss-indicating stimuli. A total of 10 schizophrenic men (7 never medicated, 3 unmedicated for at least 2 years) and 10 age-matched healthy male volunteers participated in an incentive monetary delay task, in which visual cues predicted that a rapid response to a subsequent target stimulus would result either in monetary gain or loss or would have no consequence. Compared to healthy controls, unmedicated schizophrenics showed reduced ventral striatal activation during the presentation of reward-indicating cues. Decreased activation of the left ventral striatum was inversely correlated with the severity of negative (and trendwise positive) symptoms. Reduced activation in one of the central areas of the brain reward system, the ventral striatum, was correlated with the severity of negative symptoms in medication-free schizophrenics. In unmedicated schizophrenic patients, a high striatal dopamine turnover may increase the "noise" in the reward system, thus interfering with the neuronal processing of reward-predicting cues by phasic dopamine release. This, in turn, may contribute to negative symptoms as such as anhedonia, apathy, and loss of drive and motivation.

Jonathan E Rubin,  David Terman (2015)
Deep brain stimulation (DBS) of the subthalamic nucleus (STN) or the internal segment of the globus pallidus (GPi) has recently been recognized as an important form of intervention for alleviating motor symptoms associated with Parkinson's disease, but the mechanism underlying its effectiveness remains unknown. Using a computational model, this paper considers the hypothesis that DBS works by replacing pathologically rhythmic basal ganglia output with tonic, high frequency firing. In our simulations of parkinsonian conditions, rhythmic inhibition from GPi to the thalamus compromises the ability of thalamocortical relay (TC) cells to respond to depolarizing inputs, such as sensorimotor signals. High frequency stimulation of STN regularizes GPi firing, and this restores TC responsiveness, despite the increased frequency and amplitude of GPi inhibition to thalamus that result. We provide a mathematical phase plane analysis of the mechanisms that determine TC relay capabilities in normal, parkinsonian, and DBS states in a reduced model. This analysis highlights the differences in deinactivation of the low-threshold calcium T -current that we observe in TC cells in these different conditions. Alternative scenarios involving convergence of thalamic signals in the cortex are also discussed, and predictions associated with these results, including the occurrence of rhythmic rebound bursts in certain TC cells in parkinsonian states and their drastic reduction by DBS, are stated. These results demonstrate how DBS could work by increasing firing rates of target cells, rather than shutting them down. Copyright 2004 Kluwer Academic Publishers

Terrence Sejnowski,  Jean-Marc Fellous,  M. Rudolph … (2000)
To investigate the basis of the fluctuating activity present in neocortical neurons in vivo, we have combined computational models with whole-cell recordings using the dynamic-clamp technique. A simplified 'point-conductance' model was used to represent the currents generated by thousands of stochastically releasing synapses. Synaptic activity was represented by two independent fast glutamatergic and GABAergic conductances described by stochastic random-walk processes. An advantage of this approach is that all the model parameters can be determined from voltage-clamp experiments. We show that the point-conductance model captures the amplitude and spectral characteristics of the synaptic conductances during background activity. To determine if it can recreate in vivo-like activity, we injected this point-conductance model into a single-compartment model, or in rat prefrontal cortical neurons in vitro using dynamic clamp. This procedure successfully recreated several properties of neurons intracellularly recorded in vivo, such as a depolarized membrane potential, the presence of high-amplitude membrane potential fluctuations, a low-input resistance and irregular spontaneous firing activity. In addition, the point-conductance model could simulate the enhancement of responsiveness due to background activity. We conclude that many of the characteristics of cortical neurons in vivo can be explained by fast glutamatergic and GABAergic conductances varying stochastically.