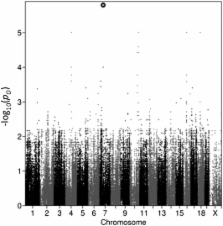 Exposure to Staphylococcus aureus has a variety of outcomes, from asymptomatic colonization to fatal infection. Strong evidence suggests that host genetics play an important role in susceptibility, but the specific host genetic factors involved are not known. The availability of genome-wide single nucleotide polymorphism (SNP) data for inbred Mus musculus strains means that haplotype association mapping can be used to identify candidate susceptibility genes. We applied haplotype association mapping to Perlegen SNP data and kidney bacterial counts from Staphylococcus aureus-infected mice from 13 inbred strains and detected an associated block on chromosome 7. Strong experimental evidence supports the result: a separate study demonstrated the presence of a susceptibility locus on chromosome 7 using consomic mice. The associated block contains no genes, but lies within the gene cluster of the 26-member extended kallikrein gene family, whose members have well-recognized roles in the generation of antimicrobial peptides and the regulation of inflammation. Efficient mixed-model association (EMMA) testing of all SNPs with two alleles and located within the gene cluster boundaries finds two significant associations: one of the three polymorphisms defining the associated block and one in the gene closest to the block, Klk1b11. In addition, we find that 7 of the 26 kallikrein genes are differentially expressed between susceptible and resistant mice, including the Klk1b11 gene. These genes represent a promising set of candidate genes influencing susceptibility to Staphylococcus aureus.

A Matin,  Michael A Singer,  Robert Nadeau … (2000)
Many valuable animal models of human disease are known and new models are continually being generated in existing inbred strains,. Some disease models are simple mendelian traits, but most have a polygenic basis. The current approach to identifying quantitative trait loci (QTLs) that underlie such traits is to localize them in crosses, construct congenic strains carrying individual QTLs, and finally map and clone the genes. This process is time-consuming and expensive, requiring the genotyping of large crosses and many generations of breeding. Here we describe a different approach in which a panel of chromosome substitution strains (CSSs) is used for QTL mapping. Each of these strains has a single chromosome from the donor strain substituting for the corresponding chromosome in the host strain. We discuss the construction, applications and advantages of CSSs compared with conventional crosses for detecting and analysing QTLs, including those that have weak phenotypic effects.

Complement factor 5 is a quantitative trait gene that modifies liver fibrogenesis in mice and humans.

Alexa Werth,  Jörg Köhl,  Johann Lorenzen … (2005)
Fibrogenesis or scarring of the liver is a common consequence of all chronic liver diseases. Here we refine a quantitative trait locus that confers susceptibility to hepatic fibrosis by in silico mapping and show, using congenic mice and transgenesis with recombined artificial chromosomes, that the gene Hc (encoding complement factor C5) underlies this locus. Small molecule inhibitors of the C5a receptor had antifibrotic effects in vivo, and common haplotype-tagging polymorphisms of the human gene C5 were associated with advanced fibrosis in chronic hepatitis C virus infection. Thus, the mouse quantitative trait gene led to the identification of an unknown gene underlying human susceptibility to liver fibrosis, supporting the idea that C5 has a causal role in fibrogenesis across species.

Arrays have been submitted to the GEO database at NCBI as series GSE23584.