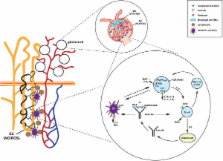 Systemic lupus erythematosus is a prototypic autoimmune disease characterized by autoantibody production and immune complex formation/deposition in target organs such as the kidney. Resultant local inflammation then leads to organ damage. Nephritis, a major cause of morbidity and mortality in patients with lupus, occurs in approximately 50% of lupus patients. In the present review, we provide an overview of the current research and knowledge concerning mechanisms of renal injury in both lupus-prone mouse models and human lupus patients.

Owen Chan,  Lynn Hannum,  Ann Haberman … (1999)
The precise role of B cells in systemic autoimmunity is incompletely understood. Although B cells are necessary for expression of disease (Chan, O., and M.J. Shlomchik. 1998. J. Immunol. 160:51–59, and Shlomchik, M.J., M.P. Madaio, D. Ni, M. Trounstine, and D. Huszar. 1994. J. Exp. Med. 180:1295–1306), it is unclear whether autoantibody production, antigen presentation, and/or other B cell functions are required for the complete pathologic phenotype. To address this issue, two experimental approaches were used. In the first, the individual contributions of circulating antibodies and B cells were analyzed using MRL/MpJ-Faslpr (MRL/lpr) mice that expressed a mutant transgene encoding surface immunoglobulin (Ig), but which did not permit the secretion of circulating Ig. These mice developed nephritis, characterized by cellular infiltration within the kidney, indicating that B cells themselves, without soluble autoantibody production, exert a pathogenic role. The results indicate that, independent of serum autoantibody, functional B cells expressing surface Ig are essential for disease expression, either by serving as antigen-presenting cells for antigen-specific, autoreactive T cells, or by contributing directly to local inflammation.

Isaac Stillman,  A Kolk,  Yuang-Taung Juang … (2008)
Double negative (DN) T cells are expanded in patients with systemic lupus erythematosus (SLE) and stimulate autoantibody production as efficiently as CD4(+) T cells. In this study, we demonstrate that DN T cells from patients with SLE produce significant amounts of IL-17 and IFN-gamma, and expand when stimulated in vitro with an anti-CD3 Ab in the presence of accessory cells. Furthermore, IL-17(+) and DN T cells are found in kidney biopsies of patients with lupus nephritis. Our findings establish that DN T cells produce the inflammatory cytokines IL-17 and IFN-gamma, and suggest that they contribute to the pathogenesis of kidney damage in patients with SLE.

Pui Y. Lee,  Yutaro Kumagai,  Yi Li … (2008)
Increased type I interferon (IFN-I) production and IFN-stimulated gene (ISG) expression are linked to the pathogenesis of systemic lupus erythematosus (SLE). Although the mechanisms responsible for dysregulated IFN-I production in SLE remain unclear, autoantibody-mediated uptake of endogenous nucleic acids is thought to play a role. 2,6,10,14-tetramethylpentadecane (TMPD; also known as pristane) induces a lupus-like disease in mice characterized by immune complex nephritis with autoantibodies to DNA and ribonucleoproteins. We recently reported that TMPD also causes increased ISG expression and that the development of the lupus is completely dependent on IFN-I signaling (Nacionales, D.C., K.M. Kelly-Scumpia, P.Y. Lee, J.S. Weinstein, R. Lyons, E. Sobel, M. Satoh, and W.H. Reeves. 2007. Arthritis Rheum. 56:3770–3783). We show that TMPD elicits IFN-I production, monocyte recruitment, and autoantibody production exclusively through a Toll-like receptor (TLR) 7– and myeloid differentiation factor 88 (MyD88)–dependent pathway. In vitro studies revealed that TMPD augments the effect of TLR7 ligands but does not directly activate TLR7 itself. The effects of TMPD were amplified by the Y-linked autoimmune acceleration cluster, which carries a duplication of the TLR7 gene. In contrast, deficiency of Fcγ receptors (FcγRs) did not affect the production of IFN-I. Collectively, the data demonstrate that TMPD-stimulated IFN-I production requires TLR7/MyD88 signaling and is independent of autoantibody-mediated uptake of ribonucleoproteins by FcγRs.