Bupivacaine in alginate and chitosan nanoparticles: an in vivo evaluation of efficacy, pharmacokinetics, and local toxicity 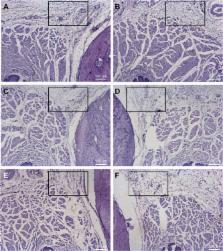 New Zealand White rabbits (n=6) received intraoral or intrathecal injections of BVC 0.5% or BVC 0.5%-loaded alginate–chitosan nanoparticles (BVC ALG). BVC plasma levels and pharmacokinetic parameters were determined in blood samples of these rabbits. An infraorbital nerve blockade was performed in male Wistar rats (n=7) with the same formulations and the vehicle (NP ALG). Histological evaluation of local toxicity after 6 hours and 24 hours of the treatments was performed in rats’ (n=6) oral tissues.

No statistically significant difference was observed between plasma concentrations and pharmacokinetic parameters ( p>0.05) after intraoral injections. However, after intrathecal injection BVC ALG changed approximately three times the values of volume of distribution and area under the curve (AUC 0–t; p<0.05). The total analgesic effect of BVC after infraorbital nerve blockade was improved by 1.4-fold ( p<0.001) with BVC ALG. BVC and BVC ALG did not induce significant local inflammatory reaction.

The encapsulation of BVC prolongs the local anesthetic effect after infraorbital nerve blockade and altered the pharmacokinetics after intrathecal injection.

Anti-inflammatory properties of local anesthetics and their present and potential clinical implications.

R Sinclair,  J Cassuto,  M Bonderovic (2006)
Development of new local anesthetic agents has been focused on the potency of their nerve-blocking effects, duration of action and safety and has resulted in a substantial number of agents in clinical use. It is well established and well documented that the nerve blocking effects of local anesthetics are secondary to their interaction with the Na+ channels thereby blocking nerve membrane excitability and the generation of action potentials. Accumulating data suggest however that local anesthetics also possess a wide range of anti-inflammatory actions through their effects on cells of the immune system, as well as on other cells, e.g. microorganisms, thrombocytes and erythrocytes. The potent anti-inflammatory properties of local anesthetics, superior in several aspects to traditional anti-inflammatory agents of the NSAID and steroid groups and with fewer side-effects, has prompted clinicians to introduce them in the treatment of various inflammation-related conditions and diseases. They have proved successful in the treatment of burn injuries, interstitial cystitis, ulcerative proctitis, arthritis and herpes simplex infections. The detailed mechanisms of action are not fully understood but seem to involve a reversible interaction with membrane proteins and lipids thus regulating cell metabolic activity, migration, exocytosis and phagocytosis.

Guido Fanelli,  S. Leone,  Simone Di Pietro … (2008)
Levobupivacaine and ropivacaine, two new long-acting local anesthetics, have been developed as an alternative to bupivacaine, after the evidence of its severe toxicity. Both of these agents are pure left-isomers and, due to their three-dimensional structure, seem to have less toxic effects on the central nervous system and on the cardiovascular system. Many clinical studies have investigated their toxicology and clinical profiles: theoretically and experimentally, some differences have been observed, but the effects of these properties on clinical practice have not been shown. By examining randomised, controlled trials that have compared these three local agents, this review supports the evidence that both levobupivacaine and ropivacaine have a clinical profile similar to that of racemic bupivacaine, and that the minimal differences reported between the three anesthetics are mainly related to the slightly different anesthetic potency, with racemic bupivacaine > levobupivacaine > ropivacaine. However, the reduced toxic potential of the two pure left-isomers suggests their use in the clinical situations in which the risk of systemic toxicity related to either overdosing or unintended intravascular injection is high, such as during epidural or peripheral nerve blocks.