Relationship satisfaction in couples confronted with colorectal cancer: the interplay of past and current spousal support 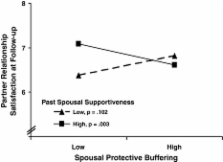 The Effect of Different Forms of Centering in Hierarchical Linear Models

Gender and social structure in the demand/withdraw pattern of marital conflict.

Andrew Christensen,  Christopher L Heavey (1990)
This study examined the effects of gender and social structure on the demand/withdraw pattern of marital conflict. In this pattern, the demander, usually the woman, pressures the other through emotional requests, criticism, and complaints, and the withdrawer, usually the man, retreats through defensiveness and passive inaction. In this study, 31 couples were assessed in 2 conflict situations: 1 in which husband wanted a change in wife and 1 in which wife wanted a change in husband. Data from husbands, wives, and observers consistently revealed a significant main effect of gender (wife-demand/husband-withdraw interaction was more likely than husband-demand/wife-withdraw interaction) and a significant interaction of gender and conflict structure (wife-demand/husband-withdraw interaction was more likely than the reverse only when discussing a change the wife wanted). Separate analyses of demand and withdraw behaviors indicated that both husband and wife were more likely to be demanding when discussing a change they wanted and more likely to be withdrawing when discussing a change their partner wanted. However, men were overall more withdrawn than women, but women were not overall more demanding than men.

Distress in couples coping with cancer: a meta-analysis and critical review of role and gender effects.

Mariët Hagedoorn,  Jolanda Tuinstra,  C. P. Coyne … (2007)
Research concerning distress in couples coping with cancer was integrated using meta-analysis and narrative critical appraisal. Individual levels of distress were determined more by gender than by the role of being the person with cancer versus that person's partner. That is, women reported consistently more distress than men regardless of their role (standardized mean difference = 0.31). The association between patient and partner distress within couples was only moderate (r = .29) but is sufficient to warrant further consideration of the notion that these couples react as an emotional system rather than as individuals. It is noteworthy that this association is not moderated by gender. With a general lack of comparison groups, the question of how much distress can be ascribed to the cancer experience cannot be answered decisively; elevations in distress are probably modest. We critically discuss these results, identify important unanswered questions, and indicate directions for future research. Attention needs to be directed toward factors other than cancer as direct influences of distress in these couples and to mediators and moderators of the cancer experience. Copyright (c) 2008 APA.