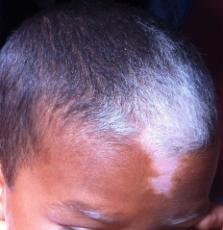 Piebaldism is a rare autosomal dominant disorder characterized by an abnormal congenital skin pigmentation causing hypopigmented areas. It is due to an abnormal melanocytes development. It usually affects only the skin, but it may be associated with other anomalies or confused with other differential diagnoses. We report the case of a 5-year old boy with piebaldism having a family history of dermatologic phenotype without other alterations. We here highlight the pathogenesis, clinical manifestations, differential diagnosis as well as the management techniques and new therapeutic trials.

Kazuyoshi Fukai,  Akira Kawada,  Naoki Oiso … (2013)
Piebaldism is an uncommon autosomal dominantly inherited pigment anomaly characterized by a congenital white forelock and leukoderma on the frontal scalp, forehead, ventral trunk and extremities. It is caused by a loss-of-function mutation in the KIT gene. Genetic analyses reveal a consistent genotype-phenotype relationship in piebaldism. However, recently reported cases of piebaldism that are milder or severer than genetically expected indicate that other factors, such as a modifier gene of MC1R, influence skin and hair color. The KIT ligand/KIT that triggers the Ras/mitogen-activated protein kinase signaling pathway play essential functions in the migration, proliferation, survival, melanogenesis and melanosome transfer of the melanocytes. We summarize current research progress in piebaldism and related disorders. © 2012 Japanese Dermatological Association.

Piebaldism: A brief report and review of the literature

The Pan African Medical Journal - ISSN 1937-8688. This is an Open Access article distributed under the terms of the Creative Commons Attribution License which permits unrestricted use, distribution, and reproduction in any medium, provided the original work is properly cited.