Diabetes is characterized by hyperglycaemia due to impaired insulin secretion and aberrant glucagon secretion resulting from changes in pancreatic islet cell function and/or mass. The extent to which hyperglycaemia per se underlies these alterations remains poorly understood. Here we show that β-cell-specific expression of a human activating K ATP channel mutation in adult mice leads to rapid diabetes and marked alterations in islet morphology, ultrastructure and gene expression. Chronic hyperglycaemia is associated with a dramatic reduction in insulin-positive cells and an increase in glucagon-positive cells in islets, without alterations in cell turnover. Furthermore, some β-cells begin expressing glucagon, whilst retaining many β-cell characteristics. Hyperglycaemia, rather than K ATP channel activation, underlies these changes, as they are prevented by insulin therapy and fully reversed by sulphonylureas. Our data suggest that many changes in islet structure and function associated with diabetes are attributable to hyperglycaemia alone and are reversed when blood glucose is normalized. 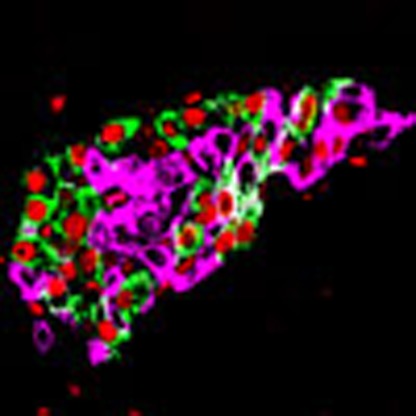 In patients with diabetes, insulin release from pancreatic β-cells is reduced due to altered islet structure and function. Here, Brereton et al. show that elevated blood glucose underlies these changes and is sufficient to reversibly alter β-cell identity in a mouse model of β-cell dysfunction.

Adult pancreatic beta-cells are formed by self-duplication rather than stem-cell differentiation.

Douglas Brown,  Amy D. Melton,  Yuval Dor … (2004)
How tissues generate and maintain the correct number of cells is a fundamental problem in biology. In principle, tissue turnover can occur by the differentiation of stem cells, as is well documented for blood, skin and intestine, or by the duplication of existing differentiated cells. Recent work on adult stem cells has highlighted their potential contribution to organ maintenance and repair. However, the extent to which stem cells actually participate in these processes in vivo is not clear. Here we introduce a method for genetic lineage tracing to determine the contribution of stem cells to a tissue of interest. We focus on pancreatic beta-cells, whose postnatal origins remain controversial. Our analysis shows that pre-existing beta-cells, rather than pluripotent stem cells, are the major source of new beta-cells during adult life and after pancreatectomy in mice. These results suggest that terminally differentiated beta-cells retain a significant proliferative capacity in vivo and cast doubt on the idea that adult stem cells have a significant role in beta-cell replenishment.

Fabrizio Thorel,  Virginie Népote,  Isabelle Avril … (2010)
Pancreatic insulin-producing β-cells have a long lifespan, such that in healthy conditions they replicate little during a lifetime. Nevertheless, they show increased self-duplication upon increased metabolic demand or after injury (i.e. β-cell loss). It is unknown if adult mammals can differentiate (regenerate) new β-cells after extreme, total β-cell loss, as in diabetes. This would imply differentiation from precursors or other heterologous (non β-cell) source. Here we show β-cell regeneration in a transgenic model of diphtheria toxin (DT)-induced acute selective near-total β-cell ablation. If given insulin, the mice survived and displayed β-cell mass augmentation with time. Lineage-tracing to label the glucagon-producing α-cells before β-cell ablation tracked large fractions of regenerated β-cells as deriving from α-cells, revealing a previously disregarded degree of pancreatic cell plasticity. Such inter-endocrine spontaneous adult cell conversion could be harnessed towards methods of producing β-cells for diabetes therapies, either in differentiation settings in vitro or in induced regeneration.