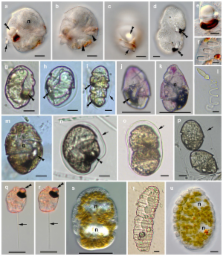 Dinoflagellates represent a major lineage of unicellular eukaryotes with unparalleled diversity and complexity in morphological features. The monophyly of dinoflagellates has been convincingly demonstrated, but the interrelationships among dinoflagellate lineages still remain largely unresolved. Warnowiid dinoflagellates are among the most remarkable eukaryotes known because of their possession of highly elaborate ultrastructural systems: pistons, nematocysts, and ocelloids. Complex organelles like these are evolutionary innovations found only in a few athecate dinoflagellates. Moreover, the taxonomy of warnowiids is extremely confusing and inferences about the evolutionary history of this lineage are mired by the absence of molecular phylogenetic data from any member of the group. In this study, we provide the first molecular phylogenetic data for warnowiids and couple them with a review of warnowiid morphological features in order to formulate a hypothetical framework for understanding character evolution within the group. These data also enabled us to evaluate the evolutionary relationship(s) between warnowiids and the other group of dinoflagellates with complex organelles: polykrikoids.

Molecular phylogenetic analyses of SSU and LSU rDNA sequences demonstrated that warnowiids form a well-supported clade that falls within the more inclusive Gymnodinium sensu stricto clade. These data also confirmed that polykrikoids are members of the Gymnodinium sensu stricto clade as well; however, a specific sister relationship between the warnowiid clade and the polykrikoid clade was unresolved in all of our analyses. Nonetheless, the new DNA sequences from different isolates of warnowiids provided organismal anchors for several previously unidentified sequences derived from environmental DNA surveys of marine biodiversity.

Comparative morphological data and molecular phylogenetic data demonstrate that the polykrikoid and the warnowiid clade are closely related to each other, but the precise branching order within the Gymnodinium sensu stricto clade remains unresolved. We regard the ocelloid as the best synapomorphy for warnowiids and infer that the most recent common ancestor of polykrikoids and warnowiids possessed both nematocysts and photosynthetic plastids that were subsequently lost during the early evolution of warnowiids. Our summary of species and genus concepts in warnowiids demonstrate that the systematics of this poorly understood group is highly problematic and a comprehensive revision is needed.

Stéphane Guindon,  Franck Lethiec,  Patrice Duroux … (2005)
PHYML Online is a web interface to PHYML, a software that implements a fast and accurate heuristic for estimating maximum likelihood phylogenies from DNA and protein sequences. This tool provides the user with a number of options, e.g. nonparametric bootstrap and estimation of various evolutionary parameters, in order to perform comprehensive phylogenetic analyses on large datasets in reasonable computing time. The server and its documentation are available at .

Juliane S Stickel,  A L Medlin,  Emilia M. Sogin … (1988)
Polymerase chain reaction conditions were established for the in vitro amplification of eukaryotic small subunit ribosomal (16S-like) rRNA genes. Coding regions from algae, fungi, and protozoa were amplified from nanogram quantities of genomic DNA or recombinant plasmids containing rDNA genes. Oligodeoxynucleotides that are complementary to conserved regions at the 5' and 3' termini of eukaryotic 16S-like rRNAs were used to prime DNA synthesis in repetitive cycles of denaturation, reannealing, and DNA synthesis. The fidelity of synthesis for the amplification products was evaluated by comparisons with sequences of previously reported rRNA genes or with primer extension analyses of rRNAs. Fewer than one error per 2000 positions were observed in the amplified rRNA coding region sequences. The primary structure of the 16S-like rRNA from the marine diatom, Skeletonema costatum, was inferred from the sequence of its in vitro amplified coding region.