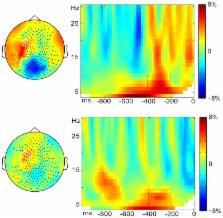 According to a prominent theory of language production, concepts activate multiple associated words in memory, which enter into competition for selection. However, only a few electrophysiological studies have identified brain responses reflecting competition. Here, we report a magnetoencephalography study in which the activation of competing words was manipulated by presenting pictures (e.g., dog) with distractor words. The distractor and picture name were semantically related ( cat), unrelated ( pin), or identical ( dog). Related distractors are stronger competitors to the picture name because they receive additional activation from the picture relative to other distractors. Picture naming times were longer with related than unrelated and identical distractors. Phase-locked and non-phase-locked activity were distinct but temporally related. Phase-locked activity in left temporal cortex, peaking at 400 ms, was larger on unrelated than related and identical trials, suggesting differential activation of alternative words by the picture-word stimuli. Non-phase-locked activity between roughly 350–650 ms (4–10 Hz) in left superior frontal gyrus was larger on related than unrelated and identical trials, suggesting differential resolution of the competition among the alternatives, as reflected in the naming times. These findings characterise distinct patterns of activity associated with lexical activation and competition, supporting the theory that words are selected by competition.

Oscillatory gamma activity in humans and its role in object representation.

Bertrand Calippe,  C Tallon-Baudry (1999)
We experience objects as whole, complete entities irrespective of whether they are perceived by our sensory systems or are recalled from memory. However, it is also known that many of the properties of objects are encoded and processed in different areas of the brain. How then, do coherent representations emerge? One theory suggests that rhythmic synchronization of neural discharges in the gamma band (around 40 Hz) may provide the necessary spatial and temporal links that bind together the processing in different brain areas to build a coherent percept. In this article we propose that this mechanism could also be used more generally for the construction of object representations that are driven by sensory input or internal, top-down processes. The review will focus on the literature on gamma oscillatory activities in humans and will describe the different types of gamma responses and how to analyze them. Converging evidence that suggests that one particular type of gamma activity (induced gamma activity) is observed during the construction of an object representation will be discussed.

M. Kutas,  S D Hillyard (1980)
In a sentence reading task, words that occurred out of context were associated with specific types of event-related brain potentials. Words that were physically aberrant (larger than normal) elecited a late positive series of potentials, whereas semantically inappropriate words elicited a late negative wave (N400). The N400 wave may be an electrophysiological sign of the "reprocessing" of semantically anomalous information.

The magnetic lead field theorem in the quasi-static approximation and its use for magnetoencephalography forward calculation in realistic volume conductors.

Guido Nolte (2003)
The equation for the magnetic lead field for a given magnetoencephalography (MEG) channel is well known for arbitrary frequencies omega but is not directly applicable to MEG in the quasi-static approximation. In this paper we derive an equation for omega = 0 starting from the very definition of the lead field instead of using Helmholtz's reciprocity theorems. The results are (a) the transpose of the conductivity times the lead field is divergence-free, and (b) the lead field differs from the one in any other volume conductor by a gradient of a scalar function. Consequently, for a piecewise homogeneous and isotropic volume conductor, the lead field is always tangential at the outermost surface. Based on this theoretical result, we formulated a simple and fast method for the MEG forward calculation for one shell of arbitrary shape: we correct the corresponding lead field for a spherical volume conductor by a superposition of basis functions, gradients of harmonic functions constructed here from spherical harmonics, with coefficients fitted to the boundary conditions. The algorithm was tested for a prolate spheroid of realistic shape for which the analytical solution is known. For high order in the expansion, we found the solutions to be essentially exact and for reasonable accuracies much fewer multiplications are needed than in typical implementations of the boundary element methods. The generalization to more shells is straightforward.

This research was supported by grants from the Netherlands Organization for Scientific Research under grant number MaGW 400-09-138 (to A.R.), and VICI 453-09-002 and 056-14-011 (to O.J.), and by a grant from the Fyssen Funding Scheme (to M.B.). The funders had no role in study design, data collection and analysis, decision to publish, or preparation of the manuscript.