Clinicopathological significance and potential drug targeting of CDH1 in lung cancer: a meta-analysis and literature review 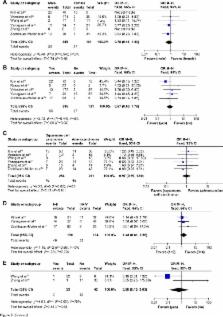 A comprehensive search of the PubMed and Embase databases was performed up to July 2014. The methodological quality of the studies was also evaluated. The data were extracted and assessed by two reviewers independently. Analyses of pooled data were performed. Odds ratios (ORs) were calculated and summarized.

The results of this meta-analysis suggest that CDH1 methylation is associated with an increased risk of lung cancer. CDH1 hypermethylation, which induces inactivation of the CDH1 gene, plays an important role in carcinogenesis and may serve as a potential drug target in lung cancer. However, CDH1 methylation does not correlate with other factors, such as smoking history, clinical stage, pathological type, sex status, lymph node metastasis, or degree of differentiation.

Ahmedin Jemal,  Rebecca Siegel,  Elizabeth Ward … (2015)
Each year, the American Cancer Society (ACS) estimates the number of new cancer cases and deaths expected in the United States in the current year and compiles the most recent data on cancer incidence, mortality, and survival based on incidence data from the National Cancer Institute, Centers for Disease Control and Prevention, and the North American Association of Central Cancer Registries and mortality data from the National Center for Health Statistics. This report considers incidence data through 2003 and mortality data through 2004. Incidence and death rates are age-standardized to the 2000 US standard million population. A total of 1,444,920 new cancer cases and 559,650 deaths for cancers are projected to occur in the United States in 2007. Notable trends in cancer incidence and mortality rates include stabilization of the age-standardized, delay-adjusted incidence rates for all cancers combined in men from 1995 through 2003; a continuing increase in the incidence rate by 0.3% per year in women; and a 13.6% total decrease in age-standardized cancer death rates among men and women combined between 1991 and 2004. This report also examines cancer incidence, mortality, and survival by site, sex, race/ethnicity, geographic area, and calendar year, as well as the proportionate contribution of selected sites to the overall trends. While the absolute number of cancer deaths decreased for the second consecutive year in the United States (by more than 3,000 from 2003 to 2004) and much progress has been made in reducing mortality rates and improving survival, cancer still accounts for more deaths than heart disease in persons under age 85 years. Further progress can be accelerated by supporting new discoveries and by applying existing cancer control knowledge across all segments of the population.

M. Esteller,  D Sidransky,  S Baylin … (1999)
Recent evidence suggests that tumor cells may release DNA into the circulation, which is enriched in the serum and plasma, allowing detection of ras and p53 mutations and microsatellite alterations in the serum DNA of cancer patients. We examined whether aberrant DNA methylation might also be found in the serum of patients with non-small cell lung cancer. We tested 22 patients with non-small cell lung cancer using methylation-specific PCR, searching for promoter hypermethylation of the tumor suppressor gene p16, the putative metastasis suppressor gene death-associated protein kinase, the detoxification gene glutathione S-transferase P1, and the DNA repair gene O6-methylguanine-DNA-methyltransferase. Aberrant methylation of at least one of these genes was detected in 15 of 22 (68%) NSCLC tumors but not in any paired normal lung tissue. In these primary tumors with methylation, 11 of 15 (73%) samples also had abnormal methylated DNA in the matched serum samples. Moreover, none of the sera from patients with tumors not demonstrating methylation was positive. Abnormal promoter methylation in serum DNA was found in all tumor stages. Although these results need to be confirmed in larger studies and in other tumor types, detection of aberrant promoter hypermethylation of cancer-related genes in serum may be useful for cancer diagnosis or the detection of recurrence.