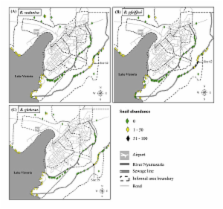 Although schistosomiasis is generally considered a rural phenomenon, infections have been reported within urban settings. Based on observations of high prevalence of Schistosoma mansoni infection in schools within the informal settlements of Kisumu City, a follow-up malacological survey incorporating 81 sites within 6 informal settlements of the City was conducted to determine the presence of intermediate host snails and ascertain whether active transmission was occurring within these areas.

Surveyed sites were mapped using a geographical information system. Cercaria shedding was determined from snails and species of snails identified based on shell morphology. Vegetation cover and presence of algal mass at the sites was recorded, and the physico-chemical characteristics of the water including pH and temperature were determined using a pH meter with a glass electrode and a temperature probe.

Out of 1,059 snails collected, 407 (38.4%) were putatively identified as Biomphalaria sudanica, 425 (40.1%) as Biomphalaria pfeifferi and 227 (21.5%) as Bulinus globosus. The spatial distribution of snails was clustered, with few sites accounting for most of the snails. The highest snail abundance was recorded in Nyamasaria (543 snails) followed by Nyalenda B (313 snails). As expected, the mean snail abundance was higher along the lakeshore (18 ± 12 snails) compared to inland sites (dams, rivers and springs) (11 ± 32 snails) (F 1, 79 = 38.8, P < 0.0001). Overall, 19 (1.8%) of the snails collected shed schistosome cercariae. Interestingly, the proportion of infected Biomphalaria snails was higher in the inland (2.7%) compared to the lakeshore sites (0.3%) (P = 0.0109). B. sudanica was more abundant in sites along the lakeshore whereas B. pfeifferi and B. globosus were more abundant in the inland sites. Biomphalaria and Bulinus snails were found at 16 and 11 out of the 56 inland sites, respectively.

The high abundance of Biomphalaria and Bulinus spp. as well as observation of field-caught snails shedding cercariae confirmed that besides Lake Victoria, the local risk for schistosomiasis transmission exists within the informal settlements of Kisumu City. Prospective control interventions in these areas need to incorporate focal snail control to complement chemotherapy in reducing transmission.

A. W. Hightower,  Daniel G. Colley,  Thomas Handzel … (2003)
A survey of 1,246 children 10-12 years old in 32 primary schools in Kenya near Lake Victoria was conducted to determine prevalence and distribution of schistosome and geohelminth infections. Stool and urine samples were collected and examined for eggs of Schistosoma mansoni, S. haematobium, and intestinal helminths. A questionnaire was used to obtain demographic information and to quantify exposure to surface waters. Houses, schools, and water sources were mapped using a geographic information system. The mean school prevalence of S. mansoni infection was 16.3% (range = 0-80%). Proximity to the lake (r = 0.89, P < 0.001) and contact with lake water were associated with infection, as were specific water-related activities including swimming, fishing, and collecting water. Sixty-three percent of students were infected with one or more other geohelminths and these infections were more homogenously distributed. The separate distributions of schistosome and geohelminth infections have important implications for combined mass-treatment programs.

Spatial and temporal heterogeneity in the population dynamics of Bulinus globosus and Biomphalaria pfeifferi and in the epidemiology of their infection with schistosomes.

M. E. J. Woolhouse,  S K Chandiwana (1989)
Populations of Bulinus globosus and Biomphalaria pfeifferi were studied in a river habitat in Zimbabwe over a period of 12 months. Data were obtained on the prevalences of infections of Schistosoma haematobium (also S. mattheei) and S. mansoni respectively. Population parameters showed the following patterns for both snail species. (1) A patchy distribution correlated with the distributions of aquatic plants. (2) Life-expectancies of only a few weeks. (3) Recruitment rates correlated with water temperature and showing a distinct seasonal peak. (4) Spatial variation in recruitment. (5) A redistribution of snails during the rainy season. Epidemiological parameters showed the following patterns. (1) Large seasonal variations in the prevalence of patent infections. (2) Evidence from size-prevalence curves that suggests a variable force-of-infection from man to snail, correlated with water temperature. (3) Prevalences of infection that were higher in the vicinity of (+/- 60 m from) major water contact sites. Local prevalences of infection for B. globosus sometimes exceeded 50% and may have approached 100% if pre-patent infections are included. Snail numbers may limit transmission at these locations. Attention is drawn to the need to make field observations at an appropriate spatial scale and also to the implications for the effectiveness of focal snail control as a means of reducing transmission.