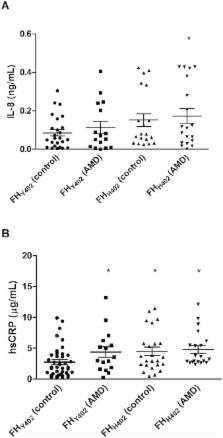 Inflammation and immune-mediated processes are pivotal to the pathogenic progression of age-related macular degeneration (AMD). Although plasma levels of C-reactive protein (CRP) have been shown to be associated with an increased risk for AMD, the pathophysiological importance of the prototypical acute-phase reactant in the etiology of the disease is unknown, and data regarding the exact role of CRP in ocular inflammation are limited. In this study, we provide mechanistic insight into how CRP contributes to the development of AMD. In particular, we show that monomeric CRP (mCRP) but not the pentameric form (pCRP) upregulates IL-8 and CCL2 levels in retinal pigment epithelial cells. Further, we show that complement factor H (FH) binds mCRP to dampen its proinflammatory activity. FH from AMD patients carrying the “risk” His402 polymorphism displays impaired binding to mCRP, and therefore proinflammatory effects of mCRP remain unrestrained.

Drusen proteome analysis: an approach to the etiology of age-related macular degeneration.

Mary Rayborn,  Xiaorong Gu,  John W. Crabb … (2002)
Drusen are extracellular deposits that accumulate below the retinal pigment epithelium on Bruch's membrane and are risk factors for developing age-related macular degeneration (AMD). The progression of AMD might be slowed or halted if the formation of drusen could be modulated. To work toward a molecular understanding of drusen formation, we have developed a method for isolating microgram quantities of drusen and Bruch's membrane for proteome analysis. Liquid chromatography tandem MS analyses of drusen preparations from 18 normal donors and five AMD donors identified 129 proteins. Immunocytochemical studies have thus far localized approximately 16% of these proteins in drusen. Tissue metalloproteinase inhibitor 3, clusterin, vitronectin, and serum albumin were the most common proteins observed in normal donor drusen whereas crystallin was detected more frequently in AMD donor drusen. Up to 65% of the proteins identified were found in drusen from both AMD and normal donors. However, oxidative protein modifications were also observed, including apparent crosslinked species of tissue metalloproteinase inhibitor 3 and vitronectin, and carboxyethyl pyrrole protein adducts. Carboxyethyl pyrrole adducts are uniquely generated from the oxidation of docosahexaenoate-containing lipids. By Western analysis they were found to be more abundant in AMD than in normal Bruch's membrane and were found associated with drusen proteins. Carboxymethyl lysine, another oxidative modification, was also detected in drusen. These data strongly support the hypothesis that oxidative injury contributes to the pathogenesis of AMD and suggest that oxidative protein modifications may have a critical role in drusen formation.

V Pasceri,  James Willerson,  Edward T. Yeh (2000)
The acute-phase reactant C-reactive protein (CRP) is an important risk factor for coronary heart disease. However, the possible effects of CRP on vascular cells are not known. We tested the effects of CRP on expression of adhesion molecules in both human umbilical vein and coronary artery endothelial cells. Expression of vascular cell adhesion molecule (VCAM-1), intercellular adhesion molecule (ICAM-1), and E-selectin was assessed by flow cytometry. Incubation with recombinant human CRP (10 microg/mL) for 24 hours induced an approximately 10-fold increase in expression of ICAM-1 and a significant expression of VCAM-1, whereas a 6-hour incubation induced significant E-selectin expression. Adhesion molecule induction was similar to that observed in endothelial cells activated with interleukin-1beta. In coronary artery endothelial cells, induction of ICAM-1 and VCAM-1 was already present at 5 microg/mL and reached a maximum at 50 microg/mL, at which point a substantial increase in expression of E-selectin was also evident. The CRP effect was dependent on presence of human serum in the culture medium, because no effect was seen in cells cultured with serum-free medium. In contrast, interleukin-1beta was able to induce adhesion molecule expression in the absence of human serum. CRP induces adhesion molecule expression in human endothelial cells in the presence of serum. These findings support the hypothesis that CRP may play a direct role in promoting the inflammatory component of atherosclerosis and present a potential target for the treatment of atherosclerosis.

A role for local inflammation in the formation of drusen in the aging eye.

Don H Anderson,  Robert F. Mullins,  Gregory Hageman … (2002)
The accumulation of numerous or confluent drusen, especially in the macula, is a significant risk factor for the development of age-related macular degeneration (AMD). Identifying the origin and molecular composition of these deposits, therefore, has been an important, yet elusive, objective for many decades. Recently, a more complete profile of the molecular composition of drusen has emerged. In this focused review, we discuss these new findings and their implications for the pathogenic events that give rise to drusen and AMD. Tissue specimens from one or both eyes of more than 400 human donors were examined by light, confocal or electron microscopy, in conjunction with antibodies to specific drusen-associated proteins, to help characterize the transitional events in drusen biogenesis. Quantification of messenger RNA from the retinal pigment epithelium (RPE)/choroid of donor eyes was used to determine if local ocular sources for drusen-associated molecules exist. The results indicate that cellular remnants and debris derived from degenerate RPE cells become sequestered between the RPE basal lamina and Bruch's membrane. We propose that this cellular debris constitutes a chronic inflammatory stimulus, and a potential "nucleation" site for drusen formation. The entrapped cellular debris then becomes the target of encapsulation by a variety of inflammatory mediators, some of which are contributed by the RPE and, perhaps, other local cell types; and some of which are extravasated from the choroidal circulation. The results support a role for local inflammation in drusen biogenesis, and suggest that it is analogous to the process that occurs in other age-related diseases, such as Alzheimer's disease and atherosclerosis, where accumulation of extracellular plaques and deposits elicits a local chronic inflammatory response that exacerbates the effects of primary pathogenic stimuli.